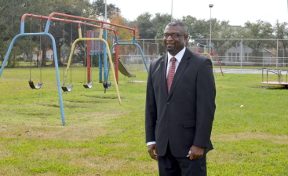 One of six key vacant positions at the City of Port Arthur has been filled with the hiring of a parks and recreation director.

He brings with him years of experience leading municipalities’ parks and recreation departments, most recently at the city of Jackson, Miss., where he was program manager — athletic division.

Smith plans to focus on Port Arthur’s youth and how best to engage them in activities that will keep them out of mischief while broadening their horizons.

“Exposure is the key. The more things you can expose a child to the greater their chance of success in life,” Smith said during a telephone interview Tuesday.

In addition to the City of Jackson, Smith has worked in parks and recreation departments in Abbeville, La., where he was director; the New Orleans, where he was chief program officer for the city’s recreation development commission; Bexar County, where as county parks manager/director he managed a county-wide parks system serving 2.5 million residents in the San Antonio area.

Smith also worked for the city of North Miami Beach, Fla., as deputy director of Parks and Recreation.

Throughout his career, Smith has worked with at-risk youth, creating new youth-centered programs and improving existing ones.

“Jerry’s work with inner city youth was one of the reasons why I felt like he was one of the best candidates for the job,” City Manager Brian McDougal said. “That experience will be helpful in Port Arthur.”

McDougal said that often, while talking with Port Arthur Police Chief Mark Blanton, he hears about different crimes committed by the city’s youth.

“Some of the problem is because our kids have nothing to do,” McDougal said. “We would like to get them in a competitive environment, blend them into after-school programs.”

Smith indicated he will work toward establishing many of the usual programs such as basketball, baseball, etc., and to also implement some unique programs that may be new to Port Arthur.

“I have spoken on a national level about hip-hop, about the programs that would impact youth and how the staff should be interacting with them on their level,” Smith said. “I am definitely going to put all the everyday normal programs in place but will add to those because not every kid is interested in baseball and basketball.”

When not working, Smith enjoys listening to jazz.

“I am a jazz enthusiast, like to go to jazz concerts, and I like jazz clubs,” he said.

Other hobbies include reading and educating himself about what is relevant in the field of parks and recreation.

Smith has two grown children, a 33-year-old daughter and a 32-year-old son, as well as one 10-year-old grandchild.

McDougal said he selected Smith after conducting telephone interviews with about 10 candidates, and then bringing three of them in for personal interviews.

Theater means the world to Javaun Butler and Destiny Mosley. The Memorial High School seniors have participated in every show... read more