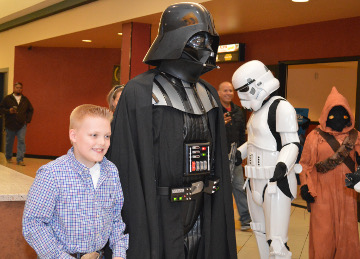 Tyler Tolbert, who turns nine on Monday, got an early birthday surprise at Central Mall on Friday. The Star Wars characters were on hand Friday for the Star Wars: The Force Awakens movie premier. Mary Meaux/The News

Eager youngsters and adults alike lined up as the famous characters stopped and posed for photos near the mall theater for Star wars: The Force Awakens movie premier. 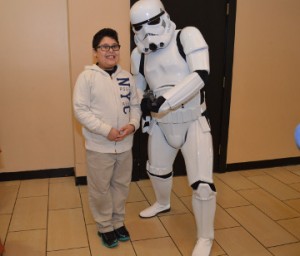 Kristofer Camacho, 9, of Nederland poses for a photo with a Storm Trooper at Central Mall on Friday. The Star Wars characters were on hand Friday for the Star Wars: The Force Awakens movie premier.
Mary Meaux/The News

Krystofer Camacho, 9, is a big Star Wars fan and has seen all of the movies except for the newly premiered one.

“I just need to see this one then I’ll have seen them all,” Camacho said. “My godmother, my mom and me, when we want to watch a movie, we watch Star Wars movies.

Camacho’s favorite characters are Anakin Skywalker and Darth Vader. He also has several Star Wars Lego sets and has asked Santa for the large Star Wars toys. His mom, Stephanie Cruz, is also a fan. 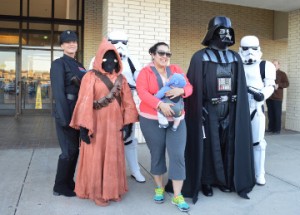 But Camacho and Cruz didn’t go into the theater to view the film. They’re waiting for Monday when Camacho’s godmother, Leslie Millan, who is also a huge fan, can see the movie with them.

Darth Vader stopped to pose for a photo with Tyler Tolbert, who will turn nine on Monday.

With a smile on his face, Tolbert said he is a big fan and was having fun. 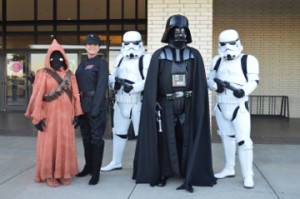 Licensed Star Wars characters were on hand to pose for photos with movie-goers and fans for the Star Wars: The Force Awakens movie premier at Central Mall on Friday.
Mary Meaux/The News

Jodie Galloway, specialty leasing and marketing manager, said mall officials thought it would be great to have the characters on hand for the movie premier.

“We thought it would be a great movie experience for Star wars fans and brought in licensed Star Wars characters to meet and greet and take photos during the premier,” Galloway said.

Santa Claus made a quick stop at Dowling Elementary School to read a Christmas story to a group of students... read more