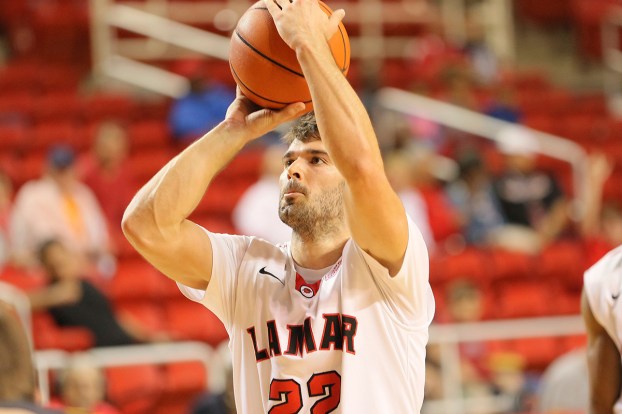 BEAUMONT — A career 2.1-point per game scorer going into this season, Lamar junior Preston Mattingly has reached double figures in the past two games.

The former minor-league baseball player followed up a double-double with 14 points in 31 minutes, Lincoln Davis scored 13 of his 15 points in the second half, and Lamar has now won five of its last six games with an 86-69 feat over Division III Texas Lutheran on Monday night.

“We have so many good guards, it opens up a lot of stuff for the big guys,” said Mattingly, a 6-foot-2 junior who started at forward along with 6-2 classmate Marcus Owens. “A lot of my stuff has been in transition, but they’ve been finding me down low, and it’s more benefit of the guards penetrating and giving me the ball.”

It’s the Cardinals’ last game before the players go home for Christmas. Coach Tic Price said they’re expected to return the day after the holiday and prepare for Howard Payne on Dec. 29 at the Montagne Center.

“I’m ready to get off my feet and relax,” Davis said.

Mattingly, a guard/forward who’s one of only two holdovers from the Pat Knight era, totaled 16 rebounds to go with 11 points in a home win over Jarvis Christian on Friday night. He had seven rebounds against and shot 4 of 7 against Texas Lutheran (7-3) of Seguin, and has made 8 of 13 in the past two games. He also made all six of his free throws Monday.

Shooting guard Davis had the game high in a balanced scoring effort by both teams. He made 5 of 8 from the floor and 4 of 5 from the line while totaling five rebounds as well.

“I just play based off of what’s given to me,” Davis said. “I create when I can. I always create for my teammates, but if I have a shot, I try to take it and make it. I looked at the stat sheet, and they were going in, so that was good.”

“We like to see it when we have four guys in double figures,” Price said. “We’re sharing the basketball.”

Eighteen players checked in for Texas Lutheran, which was led by Jordan Kouremetis’ and Alex Cage’s 12 points apiece. The Bulldogs’ bench outscored the Cardinals’ 40-28.

Owens, the other Knight recruit for the Cards, scored nine points in a 47-second span early in the first half as Lamar opened up an 18-5 lead. Lamar was ahead 46-32 at halftime and led by as many as 23 points late in the second half.

Lamar has one game remaining before the start of Southland Conference play, when it visits Nicholls State on Jan. 2.

By Van Wade The Orange Leader HOUSTON — The boys in Blue, Silver and White have brought back some hardware to... read more