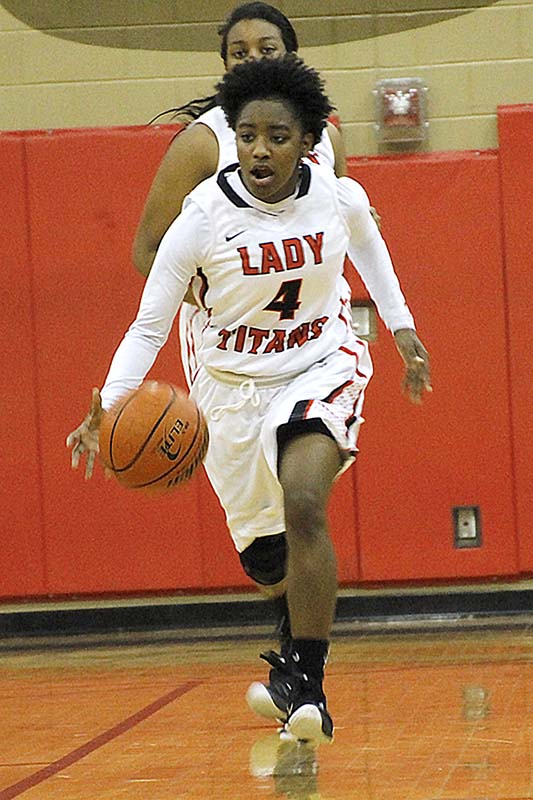 Port Arthur Memorial did open up District 21-6A girls basketball play with a victory on Tuesday, but coach Kevin Henry is still searching for the answer to the Lady Titans’ inconsistent play.

On Friday night, North Shore had quite a bit to do with Memorial’s latest defeat after a two-game win streak.

Memorial narrowed a 13-point deficit to two before Class 6A’s No. 2-ranked team gained more separation and ran away from the host Lady Titans for a 73-50 win.

“I still haven’t figured it out, or it wouldn’t have resulted in this,” Henry said, asked about Memorial’s troubles. “We go from being down six at half to being down 21 at half in third … something like that … I wish I did know.”

Junior guard Chasity Patterson hit two free throws and knocked down a jumper in the final 32 seconds of the first half to expand a 33-31 lead for the Lady Mustangs (20-1, 2-0 in 21-6A). Patterson finished with a game-high 32 points.

Patterson’s spurt was after Memorial (8-7, 1-1) clawed back from trailing 22-9 at the end of the first quarter.

Jakeira Ford and Channel Hamilton aided a 10-0 Lady Titans run with four points apiece, before Madisyn Francis snapped it with a three-point basket. Ford, who had 20 points, made a drive to the hole and knocked down a pair of free throws to pull Memorial within two points.

“We started playing with a little more energy,” Henry said. “We started using a certain energy and got after them.”

The third quarter was back-and-forth until a three-ball started a 9-2 run that built the North Shore lead to 54-41. Memorial made only one field goal for almost 8 minutes going into the middle of the fourth quarter.

“It looked like we got some critical steals in the third and opened it up in transition,” North Shore coach Allison Campbell said. “We didn’t change the defense.”

Teliah Joyce finished with 11 points (including three treys) and Autumn Jones scored 10 for the Lady Titans. Francis scored 18 points and Courtnee Johnson had 13 for the Lady Mustangs.

Memorial will play in the Barbers Hill tournament Dec. 28-29 and resume district play Jan. 2 in Port Arthur against Channelview.

By Van Wade The Orange Leader HOUSTON — The boys in Blue, Silver and White have brought back some hardware to... read more