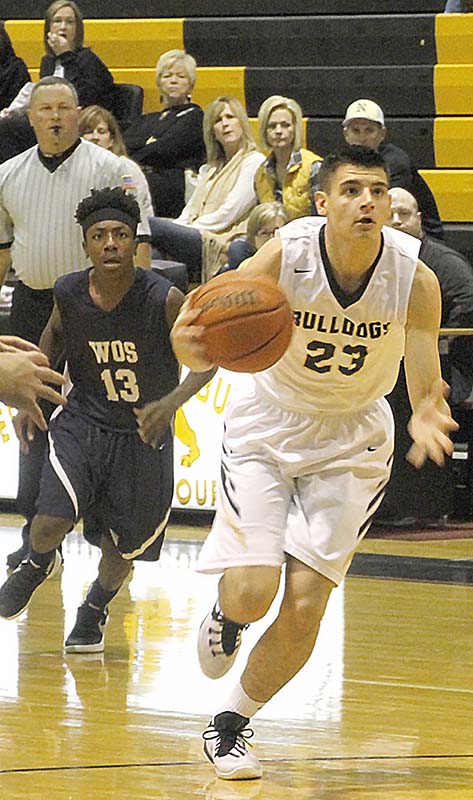 So many games, so little time.

It’s more than a week before Christmas, and Nederland has already played 20 games — seven more than Port Arthur Memorial.

The Hardin-Jefferson Basketball Marathon would be an appropriate name for a team playing that many games just four weeks into the season. For Nederland (14-6) — its marathon is coming to a break after Tuesday night.

Not that the Bulldogs are tired.

While Memorial (4-9) has been pretty busy in the regular season as well, first-year coach Kenneth Coleman would rather have had the Titans on the practice court just as much.

“Right now, we need practice,” he said. “Anytime you come in and putting in a new system, it requires a lot of reps.”

The Titans are coming off a tough stretch in the Streater-Smith/Schurr Insurance Tournament in Montgomery, where they dropped three of four and are now on a two-game losing streak. The last two defeats — 70-69 to A&M Consolidated and 65-63 to Houston Furr — both were in overtime.

“We need to sit back, relax and go over some foundational things, so we can build that foundation,” said Coleman, a Port Arthur native who was hired from North Shore in August. “It’s unfortunate we didn’t have an offseason. We’re playing so many games, we didn’t have time to practice.”

Now, the Titans must find their winning ways Tuesday night as they visit their inner-county rivals. It will probably be the last time in the foreseeable future they and the Bulldogs meet as non-district opponents; Memorial is dropping from 6A to 5A after this school year.

“It’s always been a good matchup,” said English, a Nederland graduate himself. “They’re a great challenge. They’ve got great tradition. We play them well, even when we haven’t been very good.”

The Bulldogs finished second this past week in Sour Lake, dropping the championship game to 2A top-ranked Big Sandy 48-47 on a game-winning shot with 2 seconds left. That ended a run of six games in the three-day tournament, with Nederland winning four. (Big Sandy also beat Nederland 51-48 on Thursday.)

The week before, Nederland played five games in its own Bulldog Classic, winning that tournament for the first time in its 45-year history. In between tournaments, senior guard/forward Jase Miguez went for 37 points in an 88-31 win over short-handed West Orange-Stark.

Surely, English learned plenty about his team in such a short time.

“We have more guards than usual that can help us,” English said. “We guard well, and we’re scoring better. We’re just trying to figure it out.”

The part that English and crew are trying to solve is who can handle certain on-court roles in a consistent manner. So far, Miguez and classmate Darrell Jones have been Nederland’s go-to guys on offense.

Sophomore power forward Thailan Wesley has been consistent on the offensive end for Memorial, which is deep in the backcourt as well, but Coleman is looking for the Titans to step up their intensity.

“Every time, we want to play with heart,” he said. “You can make up for a lack of talent with effort. We have to get 80 percent of loose balls. Not every time we’re the more talented team. But the talent has to be who you are.”

Effort is through which Coleman expects the Titans to find their identity. So far, it’s been a learning process for a team with six sophomores and one junior on the roster.

“The expectation never changes,” he said. “We go into games to win. If we don’t think we can win, we’re in trouble. We’re trying to be the best program we can be, which is the best program in the state of Texas.

Hokies too strong for Cardinals