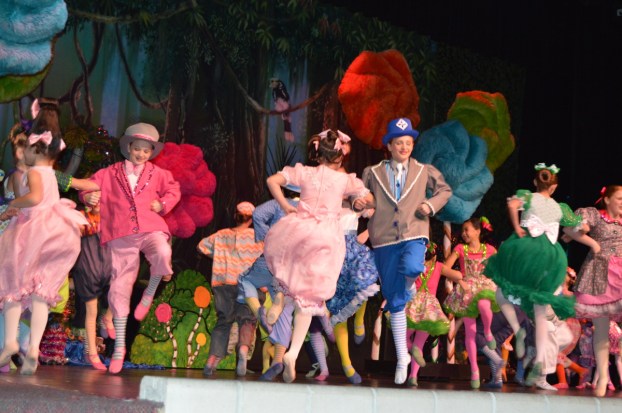 Area dance students participate in "A Whimisical CHristmas" Thursday, and will reprise their roles Friday night and Saturday afternoon.

Local dance students take the stage Thursday during the 15th season of “A Whimsical Christmas.”

WHO: “A Whimsical Christmas”

COST: Tickets $12 in advance, or at the door day of show

NEDERLAND— A cast of more than 100 young dancers brought Dr. Seuss characters to life Thursday for the 15th season of “A Whimsical Christmas,” while elementary school-age students from all over the Golden Triangle were transfixed on the elaborate Broadway-style production that featured familiar characters like Horton the Elephant, Cat in the Hat, Gertrude, Mayzie, Cyndi Lou and The Who’s, the Grinch, just to name a few.

Created and produced by the Mid County Performing Arts Company, the original musical and dance production is first presented to school children during three exciting shows, then again on Friday night and Saturday afternoon for anyone who would like to add a little whimsy to their holiday celebrations.

Friday’s performance, like Thursday’s, is at the Nederland High School Performing Arts Center. Curtain time is 7 p.m. The weekend’s second show is scheduled for 2 p.m. Saturday. Tickets are $12 for adults and children.

Reserved seating is available by visiting the website midcountypac.com. Tickets are also available at the Performing Arts Center the day of show.

To be part of the lavish production conceived by Keely Jardell, area dance students auditioned for a part. Of those, 109 were selected.

“The show features various Dr. Seuss books all rolled into one for a magical stage presentation,” Franklin said.

From Horton the Elephant, to the Grinch Who Stole Christmas, The Lorax and The Cat in the Hat, the extravagant musical features costumes straight off the pages of Dr. Seuss’ beloved children’s books.

Since the first production in 2000, there have been tremendous changes in costumes and stage sets. Although the original set is still being used, it has become more elaborate and easier to move.

Now, it takes two moving trucks and four trailers to move the props and supplies and four days are needed to build the set once it is unloaded.

The production is made possible from the more than 1000 volunteer hours. Dancers and performers practice on weekends and each puts in about four to six hours per weekend.

Each performer requires an individual dresser to help them with the quick costume changes. Some of the characters change as many as 13 times in the show.

The show was created after the Nederland Performing Arts Center was built at Nederland High School, thus offering a state-of-the-art venue for Jardell’s dream to bring a fine arts production to Southeast Texas.

“A Whimsical Christmas,” has become so popular among school children, that a third show was added.

“A lot of the children in Southeast Texas never see a real Broadway-type show, so this provides them an opportunity to do so,” Franklin said

Seats for Friday and Saturday shows are typically filled with families, whether its parents bringing their children, grandparents, of both.

“This show has gotten very popular because it is good for all ages,” Franklin said.

Lance Tschirnart will be the first to say he does not have a photographic memory. Yet, his ability to... read more