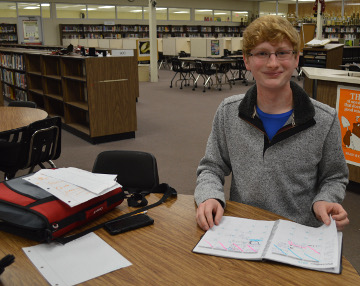 Nederland High School senior Ethan McBride flips though his busy planner on Monday. McBride is a member of the4 University Interscholastic League Congressional Debate team and will compete at the state level in Austin in January. Mary Meaux/The News

NEDERLAND — Ethan McBride wasn’t very interested in being part of Nederland High School’s debate team, that is until a certain teacher asked him to join.

McBride, a senior, learned from teacher Vicki Barfield of a new University Interscholastic League debate category — congressional debate. It didn’t take long for McBride to not only get on board, but to excel in the new debate program.

Participants in the mock legislative assembly competition draft legislation, research bills and dockets and prepare speeches in affirmation or negation of issues.

The team will move on to state competition which will be held in Austin at the capitol Jan. 11 through Jan. 13. The event will be televised, he added.

“I am incredibly excited and am really proud to be on the first team from Nederland High School to participate.”

Preparation for the competition is rigorous. All legislation is posted on the UIL website and students read the information packed bills, research and analyze them.

“There is a lot of research on the topics of each bill and resolution,” he said. “We pick a side we think is the strongest and express why it’s the best for the nation. These are actions like in the actual House, check to see how much it will cost taxpayers.”

Students are tested on how the logic of their argument flows, speech giving ability and even gestures.

One bill that caught McBride’s eye was a push to extend full rights to all U.S. territories thus allowing those citizens a chance to vote for president.

“It meant a lot to me,” he said. “There are over three million, mostly U.S. citizens, affected.”

Another topic of interest was the need for greater protections against domestic terrorism. Billions of dollars are spent for terrorism abroad, he added. Other bills of interest involve Syrian refugees and college tuitions.

McBride is one busy student — he is editor of the school newspaper, the Bulldog Beat, and has been on the newspaper staff for two years. He’s a member of the National Honor Society, vice-president of the Key Club, point secretary for the Theater Club, president of the Journalism Club and captain of the Journalism team, executive council member of the French Honor Society and executive council member in the French Club, member of the Chess Club, Hobby Club, Lamar State College-Port Arthur’s book club for co-enrolled students, Academic Decathlon team member and is active in the youth group at St. Charles Church.

While seated at the school’s library, Librarian Carolyn Rosales came over to speak with McBride.

“He’s the cream of the crop,” Rosales said, adding McBride is always in the library studying or doing research work.

McBride’s work with the new debate team will likely lay the foundation for his future. He plans to major in political science then go to law school. Later he would like to work as a prosecutor.

The learned student has applied to, and was accepted by, 13 colleges and universities including Texas A&M, University of Texas, Sam Houston and McNeese. He will likely choose Stephen F. Austin State University in Nacogdoches, the alma mater of his grandparents Neal and Marilyn Morgan.

McBride is the son of Allison McBride and Mike McBride.

NEDERLAND — Southeast Texans had a chance to “ice” skate minus the freezing temperatures in Nederland on Saturday. Rubber mats... read more