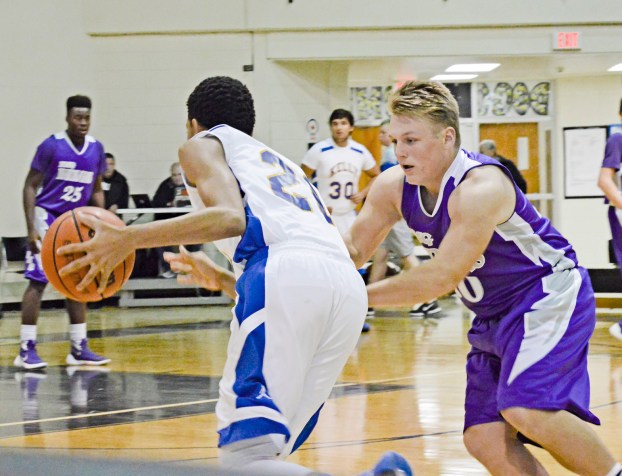 NEDERLAND — The Port Neches-Groves Indians let go a chance to knock Beaumont Kelly off the list of unbeaten teams in Southeast Texas.

The Indians led 32-30 late in the third Friday at the Bulldog Classic, but then the Kelly Bulldogs went on an 18-0 run en route to a 61-45 victory.

Free throw shooting kept the Indians in the game in the first half.

The Indians scored 23 points in the first half and 15 came from free throw shots.

PN-G then took a 28-24 early in the third off a three-point play from Wiggins and a bucket from Ryan Abel.

Wiggins finished with 17 points and eight rebounds and Abel had a double-double, 16 points and 12 boards.

“We talked after the game we have to work on the things we can correct,” Abel said. “We are still kind of new together, so we have to have some practice time. The chemistry is there and the ability is there. We just have to put it all together.”

Abel was referring to the fact the Indians are still adjusting to three football players who have had limited practice time after participating in the playoffs. Adam Morse joined Caisen Sullivan and Keynel McZeal on the team Friday. It was the first action for Morse on the court since his sophomore season.

Abel was impressed Friday with the play of Wiggins, who has worked himself into the starting lineup.

“He has got the tools,” Abel added. “This is good for him to see good varsity competition at a young age. He is responding too it. He is still making some sophomore mistakes but they are ones that can be corrected. He is going to be fine one day.”

Cannon Broussard finished with 18 for Kelly and both John Kraemer and Tevin Baker each had 11 points.

PN-G cut the Fallbrook lead to 46-45 heading into the fourth. Fallbrook outscored PN-G 14-10 in the game’s final eight minutes.

Able led the Indians with 17 points while Wiggins and Ram Polavarapu each had eight points. McZeal added six points and Morse scored four in his first game of the season.

The Indians face Woodville at 10:30 a.m. Saturday in the Competition Gym at Nederland High School.

The News staff report BEAUMONT — Defense was on display, and Port Arthur Memorial displayed plenty of it. The Lady... read more