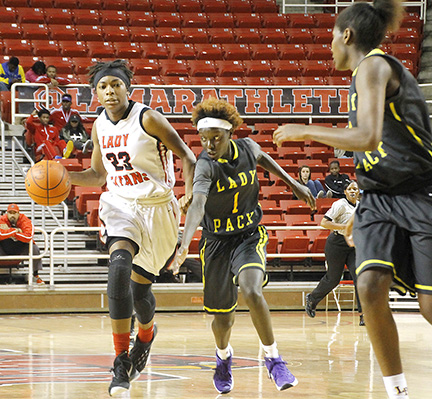 Jakeira Ford of Memorial pushes the ball up the court as JaKayla Suell (1) and NaTasha Mack of Lufkin try to stop her Saturday in Beaumont. (I.C. Murrell/The News)

BEAUMONT — The Young Men’s Business League/Beaumont Independent School District South Texas Shootout could very well have been called the Port Arthur Memorial Invitational the last three years.
That’s how long the Lady Titans defended their championship in what is now a 61-year-old event.
But Saturday, the Lufkin Lady Pack made plans to crash the party.
Their speed and offensive rebounding were too much for the Lady Titans to overcome Saturday in a 75-57 victory inside the Montagne Center. Lufkin (14-0) started out so fast, it had a 6-2 lead before Memorial (6-6) called timeout 39 seconds into the game.
“We responded, but we didn’t do it for 32 minutes, though,” Memorial coach Kevin Henry said. “It’s a game of four quarters and two halves, and we didn’t play a complete game tonight.”
The defeat spoiled what started out as a great day for Memorial. Eleven days after a 36-point loss at Beaumont Central, the Lady Titans turned the table with a 56-52 victory Saturday morning.
Henry said the Lady Titans weren’t zapped of any emotion or energy from the big victory.
“[Lufkin] just played harder than we did, bottom line,” Henry said.
Lufkin’s quick start is nothing new. In fact, it’s the Lady Pack’s style of play.
“We won the Conroe tournament, and all four games, we ran our tip play to get a bucket, got two or three turnovers, and it was 8-0 before they called timeout, so it’s been fun,” Lady Pack coach Harold Scroggins said.
Jakeira Ford, who had a game-high 29 points, scored on a turnaround jumper to pull Memorial within 15-11, but the Port Arthur team would not get any closer.
Center NaTasha Mack scored seven of her 25 points in the second quarter, keying a 9-0 lead to push the Pack’s lead to 37-21. Memorial trailed 37-24 at halftime.
Ford tried keep the Lady Titans in it during the third quarter, when she scored 15 points. She drove to the basket with 6:01 left in the game to whittle the deficit to 56-51, but Mack’s size in the low blocks was too much for Memorial, as she helped Lufkin control the boards and string 13 unanswered points to all but end the Lady Titans’ reign.
Ridaija Miller finished with 19 for Lufkin. Channel Hamilton, who previously went by Channel Babineaux, had 11 for Memorial, including a pair of three-point baskets.
Memorial will play at Houston Westside on Wednesday.

PA MEMORIAL 56, BEAU. CENTRAL 52
BEAUMONT — What a difference 11 days make.
Memorial was short-handed in the backcourt due to injuries when it played at Central on Nov. 24, but the Lady Titans had all hands on deck for the rematch of the Jefferson County rivalry.
Memorial was the more dominant team Saturday morning, leading 47-35 through three quarters. Hamilton led the way with 17 points, all coming before the fourth quarter.
Ford added 13 points, and Autumn Jones, who finished with nine, nailed 3 of 4 free throws down the stretch.
Tonjdreanna Clifton scored 15 points, and Destinee Medlock and Anastasia Mickens each tallied 11 for Central.

BOYS
SHARPSTOWN 55, PA MEMORIAL 53
BEAUMONT — At McDonald Gym, the Apollos’ defense literally won in the end of the South Texas Shootout consolation final.
The Apollos forced the Titans (3-5) to go inside the arc for a game-tying shot, a floater from the baseline that went no good as time expired.
Thailan Wesley scored 17 points and Tyryn Hinton had 13 for Memorial.
Malik Dickens and Albert Cosey each had 16 to lead Sharpstown. Dickens converted all 12 of his free throws.
Jordan Guilbeau added 14 points for the Apollos.