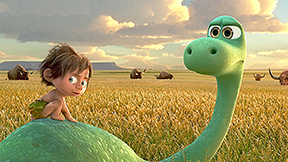 THE MOVIE GUY: The good, but shallow, ‘Dinosaur’

“The Good Dinosaur” is Pixar’s second film of the year, and while it’s not anywhere near as good as their previous effort, “Inside/Out,” it still has enough superb visuals and funny moments to keep the young ones entertained over the holidays.

Adults who continue to believe that the Pixar name is a guarantee of quality (I’m doing my best to remain in that camp) may have a difficult time getting past “The Good Dinosaur”’s meandering and shallow story line. Still, you’ve got to admit that the film takes its cute concept about as far as it can go. The story is set in an alternative timeline where the asteroid that wiped out all of our dinosaurs never hit the Earth. Consequently, the dinosaurs evolve into talking, civilized creatures while less-evolved human beings become their version of wild animals.

The specific story focuses on a family of Apatosaurus frontier farmers who are stocking up for the winter. The father (Jeffrey Wright) assigns his timid young son, Arlo (Raymond Ochoa) to get rid of the pest that’s eating their corn supply. The pest turns out to be a feral human boy that will become Arlo’s new pet, Spot (Jack Bright).

The bulk of the movie follows this Dino-boy and his human dog trying to get back home after a monster storm separates Arlo from his family. They wander through a dinosaur version of the Old West, facing velociraptor cattle rustlers, some crazy pterodactyls and other Wild West oddballs. They also learn some valuable life lessons from some cowboys, who just happen to be a very nice family of Tyrannosaurus rexes, voiced most notably by Sam Elliott.

It’s all a bit strange, but still quite fun. The problem is that the film doesn’t add up to much more than just a fun story. Arlo has an adventure and learns lessons about friendship and working through his fears, but there’s nothing here that will truly impact children beyond making them ask Santa for some dinosaur toys this Christmas.

On the other hand, I must point out the film’s amazing animation. Nature scenes have always been difficult to pull off as animated backgrounds, but “The Good Dinosaur” has some of the most visually impressive outdoor vistas that I’ve ever seen committed to film. A sequence where Arlo and his father run through a field of fireflies is worth the ticket price alone.

The problem, of course, is that most young kids won’t be interested in much more than the funny characters and simple storyline, so while “The Good Dinosaur” will still work for younger children, it will probably leave grown-up and even older kids wanting something a bit more robust. For a movie about dinosaurs, “The Good Dinosaur” certainly could have used a bit more meat on its cinematic bones.

Movie reviews by Sean, “The Movie Guy,” are published bi-weekly in “The Port Arthur News” and seen weekly on KFDM and KBTV. Sean welcomes your comments via email atsmcbride@sbgtv.com.com.

THE MOVIE GUY: ‘Creed’ is a knockout

“Creed,” is the latest film in the venerable “Rocky” movie franchise, and while the title suggests that this might be... read more