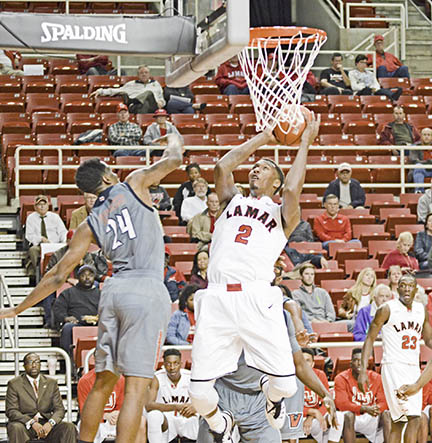 Cardinals need no comeback thanks to Garth’s three pointers

BEAUMONT — This is all Tic Price wanted.
Three days after enduring a loss on his birthday, the Lamar Cardinals wasted little time in giving their second-year head coach a late present with a dominating 83-60 win over Texas-Rio Grande Valley before 1,766 Wednesday night at the Montagne Center.
But it’s how the Cardinals (3-3) — who ended a two-game slide — won that he liked the most.
“Probably the best thing about this game, we had four guys in double figures,” he said. “We had better shot selection. Defensively, I thought we really played with good energy from start to finish.”
Lamar never trailed by more than three points against UTRGV (2-5), after the Cardinals fell into double-digit holes in each of their past two games against Rice and California-Riverside. On this night, freshman-shooting guard Nick Garth was determined not to let that happen again.
Or junior swingman Marcus Owens.
Garth finished with 21 points, including five three-point baskets, off the bench to lead the Cardinals. He hit a pair of treys that gave Lamar its first double-digit lead, 25-14, more than 9 minutes into the game.
“Me and my teammate here [Owens] got to the gym almost every day for a couple of hours getting shots up, so that really helped,” said Garth, who had four three-balls in the first 20 minutes. “We had to get this win because we were on a two [game] losing streak.”
Said Price: “When he’s on a roll, it’s like having butter on a biscuit.”
Owens, also a reserve, added the Cards’ energy from the start. He had 10 of his 12 points before halftime and added five rebounds. He and Garth attacked the rim often to constantly draw fouls from the Vaqueros and get to the foul line, helping the Cards pad a lead up to 33-16.
“We just wanted to come out and play hard,” Owens said. “We wanted to extend it for a whole half, but we wanted to play a 40-minute game, so we just wanted to dominate it half-by-half, so we just wanted to bring energy off the bench, like coach wanted us to do.”
Lamar shot 29 for 43 from the foul line. Lincoln Davis and Owens each shot 5 for 6, while Port Arthur freshman Dorian Chatman chalked up 6 for 10 and finished with 14 points and five boards.
What also made Price happy was that Dontavious Sears, a senior who made his first start of the season, registered 11 points and 10 rebounds.
The defensive effort was one of the Cards’ finest so far this season. The 60 points were the second-most they allowed this season, and they avoid tying the season low with a Christopher Ikuenobe hook shot with 3 seconds left. Austin College scored 58 points in Lamar’s season opener, a 43-point home win on
Nov. 13. That was when Owens had season highs of 17 points and 13 rebounds.
Davis, who finished with seven points, seven boards and three assists, was active defensively with three steals.
“We put a lot of pressure on them in the first half because we played at a very high pace,” Price said, adding the Vaqueros may have been worn down from a 78-65 loss at Houston just two nights earlier. “We felt pace would control this game.”
The Vaqueros, formerly the Texas-Pan American Broncs, was held to one field goal during the final 10:03 of the first half. They shot 39.2 percent from the floor (20 for 51) and hit 17 of 26 free throws (65.4 percent). The Cards connected on 24 of 54 from the floor for 44.4 percent.
Lamar’s biggest lead was 69-32 after Sears’ two-hand slam with 11:17 left.
J.J. Thompson led UTRGV with 21 points and four assists. Shaquille Hines added 16 points and four assists.
Lamar will close its three-game home stand at 8 p.m. Saturday against Idaho State.

Former TJ quarterbacks to square off as coaches

The glory days of Thomas Jefferson High School will be on display at Cypress’ Berry Center this Saturday. Former Yellow... read more