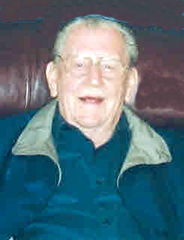 He was born on February 5, 1923 to Leah Irene Stuckey Barnett and Roy Calhoun Barnett in Mercury, Texas. John has been a resident of the area since the late 1930’s.

He served in the U. S. Navy as a radio operator in the Pacific during World War II.

John retired from the U. S. Postal Service as a letter carrier after 35 years of service.

He was preceded in death by his parents, his wife, Dorothy Jeger Barnett and his son, Mark Daniel Barnett.