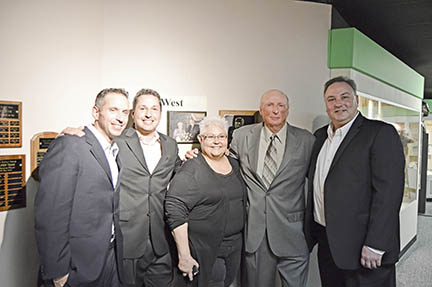 Former News sports editor Bob West was inducted into the Sports Hall of Fame of the Museum of the Gulf Coast Friday. Pictured with West are his sons and wife (from left to right) Damon, Grayson, Genie and Brandon West. (Gabriel Pruett/The News)

Longtime and retired Port Arthur News sports editor Bob West was inducted into the Sports Hall of Fame of the Museum of the Gulf Coast Saturday.
West’s career in the sports scene of Southeast Texas started in 1966 at the Beaumont Enterprise. He came to the News in 1971 and a year later was named sports editor. West held that position until April 2015 when he announced his retirement.
“I’ve had many awards but nothing compares to this,” West said. “To be in this museum with many of the athletes I wrote about and was at their induction, how can you measure that? Now I am on the other side of it and it is really pretty overwhelming. When I learned of this induction, it really took my breath away.”
The Texas High School Coaches’ Association named West the Texas Sports Writer of the Year twice in his career, and he also won the Fred Hartman Excellence in Sportswriting award twice. Among the top accomplishments of his career were the 12 Port Arthur News Homecoming Roasts that raised more than $700,000 for the Museum of the Gulf Coast. Sports honorees were Jimmy Johnson, Bum Phillips, Billy Tubbs, Tom Hicks, Joe Washington Jr. and Jamaal Charles. Other honorees included attorney Walter Umphrey, then-Texas Gov. Ann Richards, United States congressman Jack Brooks, Texas senator Carl Parker and Texas Secretary of State Jack Rains.
West is also proud of his fund-raising efforts on behalf of the Babe Zaharias Foundation. Those efforts were recognized in 2010 with an endowed $50,000 Babe Didrikson Zaharias-Bob West scholarship for women’s athletics at Lamar University.
Now when visitors go into the Sports Hall of Fame section of the Museum, West’s plaque is the first one to be seen.
“The first thing they will see is this sports writer,” West added. “They will look and I hope they see and get I was a guy who worked so hard to promote Southeast Texas. That is something I take great pride in.”
West in his induction speech also made it very clear he was glad to know Dallas Cowboys owner Jerry Jones was not on the board of directors because West would have received the Jimmy Johnson treatment. Jones has yet to include Johnson in the Cowboys Ring of Honor and West’s longtime hobby was poking fun of Jones in his Sunday columns.
“The only real thing I miss since my retirement is making fun of Jones and the Cowboys,” West said.

By Van Wade The Orange Leader NEW CANEY – It was smooth sailing for the West Orange-Stark Mustangs as they... read more