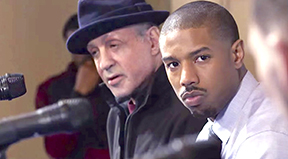 Sylvester Stalone and Michael B Jordan in “Creed.”

THE MOVIE GUY: ‘Creed’ is a knockout

“Creed,” is the latest film in the venerable “Rocky” movie franchise, and while the title suggests that this might be nothing more than a slapdash spin off, rest assured that this movie is a worthy addition to the series.

What’s more, “Creed” is one of the best “Rocky” movies yet.

This time around, Michael B. Jordan plays the Rocky figure, Adonis Creed, the illegitimate son of Rocky’s original competitor, Apollo Creed (the late Carl Weathers). The son was rescued from foster care by Apollo’s widow (Phylicia Rashad) and raised to be his own man, but demons drive our young hero. His quick temper gets him into trouble and he’s worried about his ability to live up to his father’s legacy.

So it’s off to Philadelphia to track down his father’s old friend, Rocky (Stallone). The Italian Stallion wants nothing to do with boxing anymore, but he is eventually persuaded to train Apollo’s kid, using many of the same techniques that helped him in the original movie. The similarities don’t stop there. Just as in the original film, Creed also gets an improbable shot at a big match against a heavily favored champ (real-life boxer Anthony Bellew) and the film even manages to sneak another touching love story into the mix, when Creed falls for his neighbor (Tessa Thompson).

The boxing details don’t really hold up to scrutiny, and there’s a melodramatic health scare bit that doesn’t quite work, but “Creed” gets most of the story right. This is the improbable tale of a long-shot underdog who uses hard work and a never-say-die attitude to make the most of his shot at glory. Sound familiar? “Creed” plays these story touchstones almost as well as the original film.

Jordan is the perfect actor in the title role, with impressive acting chops to show us what’s driving the character as well as the physical chops to make the boxing sequences seem entirely credible. Stallone also deserves kudos for some of the best acting of his career. He’s playing a man who’s slowly breaking down while Creed is a man on the rise. These two character paths give the film some nice depth and contrast.

Of course, it’s the boxing scenes that truly define the franchise, and “Creed” is a knock out on this account as well. You know what to expect from the adrenaline-filled final bout, but an earlier fight that’s shot in one interrupted camera take really sets the standard for the rest of the film.

By the time the final bell rings, this ends up being a thrilling sports movie that pays reverential homage to the “Rocky” franchise while staking its own claim to cinematic glory. We all still love “Rocky,” but fans are going to love “Creed” just as much.

By Tommy Mann Jr. The holiday season is upon us, and that means visits with family and friends. If you... read more