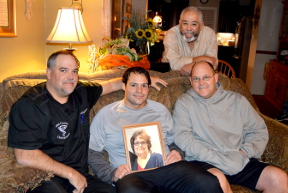 There will be an empty plate at the holiday table this year when Barbara Sosa’s family sit down to enjoy a bountiful Thanksgiving meal.

For the first time, their beloved mother won’t be there tending to the cooking, or making sure everyone has had enough of her scrumptious turkey and dressing served with a big dollop of love.

Barbara Sosa died a month ago, but she’ll be there in spirit, her youngest, Joey Sosa, 41, said, making sure her family remembers to give thanks to a community that rallied both before and after her death to do what they could to help one of their own.

“When Mom first got sick, a group of people started raising money for her medical expenses. But, then she ended up passing away and it grew to a bigger group of people coming to support her family,” Joey Sosa said. “She was such an outstanding lady, just the compliments I have received, knowing I was one of her sons,” it really touched me knowing how the community has treated us.”

Barbara Sosa had a good reputation around town. She’d worked for the city’s police department for 19 years, and had spent her life doing for others.

At 66, she was ready to retire from her duties as secretary and court clerk.

She’d not felt up to par for a while, but thought she was just tired and would get some rest once she retired.

Instead, just a couple of days after her last day at the police department, her condition worsened.

A trip to the doctor brought the worse news: A diagnosis of liver cancer.

“It had metastasized. It was really bad and was too large for them to do anything about. It was tough, it went quick and I felt bad she had just retired. She had so many plans,” Joey Sosa said.

Though the family grieved their loss, and is still doing so, an outpouring of love from the community has helped them get through the difficult time, and provided a telling glimpse into what others thought about the boys’ mother.

Shelly Benoit, 47, of Grove, helped organize what was first an effort to raise money to offset medical bills.

The effort continued after her death.

Musicians and deejays at Lions Park joined horseshoe and washer teams and food vendors to raise more than $6,000 to defray medical and funeral expenses.

“There were so many people out there that day and everyone had something kind to say about her. She is such a lovely person, some walked up to the park and did not want the food, they just made the trip in her honor,” Benoit said.

The kind acts and even kinder words have stayed with the Sosa family.

“The one thing about my mom is she never called out for gratitude for herself. She never wanted to let it be known that the things she was doing for people. But, the outpouring of support really showed what people thought of her. It was really touching, to have that outpouring.

“It really picked up our spirits to know they had such respect for not only her but our family any rough situation like this is nice to know we have the kind of community that cares to do thing like this. We really appreciate it from the bottom of our hearts.”

This Thanksgiving, Joey Sosa said he felt sure his mother would want her family to remember that kindness shown by her community, and to be thankful knowing they are blessed to live in such a giving community.

“As humble as she was, if she was able to see the show of support she got, she would have known she did good,” Joey Sosa said. “It was very touching what they did. I know she would be a very, very proud lady.”

She would also want her family to carry on a tradition she love.

“Mom did everything to prepare for Thanksgiving. She made the best dressing in the world,” her oldest son Tommy Johnson, 47, of Nederland, said.

While she was known for her culinary skills, Barbara Sosa was also know for making sure the family gave thanks for everything good in their lives.

Each Thanksgiving the family would write what they were thankful for on a cloth tablecloth then sign their names, her middle son Dr. Tim Johnson, 46, of Groves said.

Those thankful notes became the story of her family’s lives, recorded on fabric that she saved year after year.

The family know their mother would not want them to dwell on her passing this year, but rather give thanks for their blessings.

This year they can think on no greater blessing than wonderful woman who they believe will be there with them, in spirit urging them to be thankful.

“We were very blessed, all of us, and I am very thankful for the years we had together,” Joe Sosa, her husband of 42 years, said.

PORT NECHES — A group of people in support of the cross monument at Port Neches Riverfront Park are reaching... read more