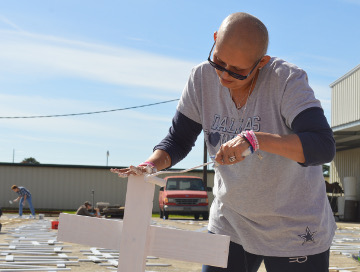 Carolyn Zeringue of Port Neches volunteers her time to paint white crosses in a show of support for the cross monument at Port Neches Riverfront Park on Tuesday. Zeringue was diagnosed with breast cancer last August and is undergoing chemotherapy. Mary Meaux/The News

PORT NECHES — A group of people in support of the cross monument at Port Neches Riverfront Park are reaching out to senior citizens who may not be savvy with social media.

Chris Johnson, of Summer’s Abbey Flooring, 3161 Nall St. in Port Neches, has become a major part of the Facebook group Little White Cross Mid-County Texas Chapter 1. His business is now ground zero for construction and painting of hundreds of 3-foot by 2-foot crosses made from 1X4 pieces of lumber. 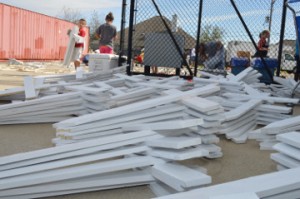 Stacks of painted crosses to be distributed outside Summer’s Abbey Flooring in Port Neches on Tuesday.
Mary Meaux/The News

Recent media coverage of the issue between the Freedom From Religion Foundation — who are asking for the cross to be removed — and the city spurred the formation of the Little White Cross group. Most of the information related to the group is passed down via Facebook, and group leaders realized they might be missing getting the message out to senior citizens who aren’t on Facebook. 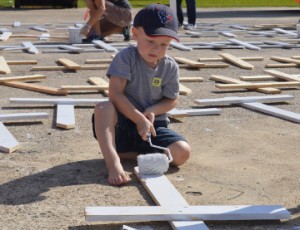 Hundreds of volunteers come and go, building and painting crosses. What began as a mission to save the cross in Port Neches has become, for some, a private spiritual journey.

“When God puts something in your heart, you gotta go for it,” group member Kim Hughes said. “Just to see the love of God in this community. It’s amazing.”

The goal of the cross project is to provide a cross for anyone in the Mid-County area who wants one, Johnson said. 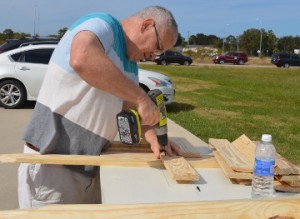 Tina Boneaux, one of the group’s founding members, said the cross project has done a lot for her.

“I have my own past,” Boneaux said. “These people don’t understand what they’re doing for me. It seems like we (citizens) weren’t communities anymore. This has shown there are a lot of caring people. I’ve met great new friends. It’s a lot of love. When we started off, for me, it was about the cross. For me it’s more of love and community coming together. It’s time for all of us to work together and show people we care about each other.”

Carolyn Zeringue of Port Neches busied herself painting crosses under the bright sun, though her head was bare because of chemotherapy. She was diagnosed with breast cancer in August 2014.

“I’m here because I do believe in God and believe its our right as citizens to help keep the cross up. It’s been there 45 years, why take it down now,” Zeringue said. “I believe in a higher power, that’s God.”

Chrissy Mercer brought along her children, Caden, 3 ½, Caylee, 6, and Camryn, 9.

“I always think it’s important to set an example with the kids, especially things we believe in, and we have a strong belief in Jesus and the cross, and we don’t want the cross gone,” Chrissy Mercer said. “It’s important to take a stand for certain things.”

Camryn said she understands the meaning behind painting the crosses.

As the group worked on the crosses, Lori Henckel of Nederland and Pam Lawsom of Port Neches, drove up to make a donation and pick up five crosses each. They said they will take a cross each and give crosses to family members. For them, it’s a show of faith.

Boneaux said there will be another gathering this Saturday from noon to 4 p.m. at Port Neches Riverfront Park. A minister will attend the event and there will also be a community barbecue.

Port Neches Zoning Board to appoint attorney in fight with City

PORT NECHES — Port Neches’ Zoning Board of Adjustment is looking to hire an attorney to help in a legal... read more