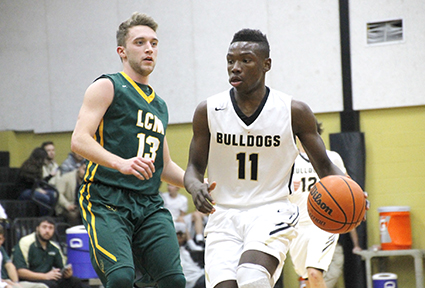 Darrell Jones of Nederland drives around Andrew Daspit of Little Cypress-Mauriceville in the second half Monday. (I.C. Murrell/The News)

NEDERLAND — Already seven games into the week-old basketball season, the Nederland Bulldogs hardly showed any signs of slowing down.

Coming off a third-place finish in the New Caney ISD tournament two days earlier, the Bulldogs didn’t shoot the ball as well as they would have liked in the Competition Gym on Monday, but they found a mix of three-point shooting and slashing to the basket in the second half to pick up already their fifth win of the season, 60-43 over Little Cypress-Mauriceville.

“They did a good job controlling the tempo and kind of frustrated us a little bit,” Nederland coach Brian English said. “That was a good game plan by them, and they held us in check for a little while, but we played better in the second half.”

Nederland plays at Hardin-Jefferson tonight and will be off until it hosts the Bulldog Classic Dec. 3-5.

LC-M (1-2) scored seven unanswered points in the final 4 minutes of the first half to pull within 22-18, but Nederland attacked from the outside to start the second half and canned five baskets from three-point range in the third period. A Katon Brown three-pointer at the buzzer pulled the Bears within 41-32.

It was 44-36 with 6:02 left in the game before Nederland held LC-M to just one field goal the rest of the way.

Darrell Jones scored 16 of his game-high 20 points in the second half to pace the Bulldogs. Jase Miguez contributed 15 points.

“Right now, it’s real early in the season,” LC-M coach Darin Harley said, his team a year removed from a Class 4A area-round appearance. “We try to play people who we think are going to be better than us in a higher classification. So, what it’s all about is getting better this time of year.”