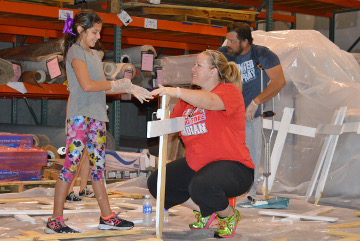 PORT NECHES — A downpour of rain ushering in a cold front did little to deter a band of Port Neches area residents from kneeling at the cross — or a couple of hundred crosses — Saturday.

The group met at Abbey Flooring in Port Neches, where they painted miniature versions of the big white cross in Port Neches Park.

One after one, the wooden crosses were painted white, with each stroke a defiant gesture, aimed at delivering a message.

“We’re here this morning for a good cause — we want to see our cross stay,” Krista Chaisson, 44, of Port Neches, said.

Last week Port Neches city leaders were notified by the Freedom From Religion Foundation with a letter requesting the 10-foot white cross that has stood at Port Neches Riverfront Park since 1970 be removed.

The group cited the constitutional principal of separation of state and church after receiving a complaint by a Port Neches resident.

That request has not set well with the community. Rather than take the religious symbol down, the community has vowed it will stay.

Saturday’s paint party was the first of several planned in an effort to fill Port Neches lawns with tiny white crosses.

A special service around the cross in Port Neches Riverfront Park is planned for Sunday. Beginning at 6:30 a.m. anyone can come and pick up one of the little white crosses to place in their lawn, or business. At 7 a.m. a prayer service is scheduled. Those attending will form a circle around the cross while David Bouillion, chaplain of Port Neches Eagle Riders motorcycle group, leads in prayer.

“I have lived in this area my whole life, and this is ridiculous to move the cross, ”Teddy Adams, of Nederland said. “If people don’t like the cross, they don’t have to look at it.”

“It’s been here for 45 years, and now just one person is having a problem with it,’ Adams’ 9-year-old daughter Abbigayle said.

Adams said he would not have a problem if other religions wanted to erect a religious symbol, but thought it wrong that one person would try and take the longstanding cross down.

“If some other religion wanted to put something up I don’t think anyone would make a big deal about it,” he said.

Donna Andrews, 59, of Port Neches, came up with the idea after hearing about the push to have the city’s cross removed.

Several years ago, Andrews had read about a church making little white crosses and kept the article.

“I dug out the story and contacted Tina Boneaux,” she said.

From there, about five or six women organized what they are calling the Little White Cross group.

“It started in our front yard and back yards, and now has spread. We plan on making little white crosses as long as people want them,” Andrews said.

Little White Cross is a not-profit organization. Donations may be made to Neches FCU, account 65410, in care of Little White Cross. All donations will go strictly for materials to keep the mission going.

Donations are not necessary to receive a free cross.