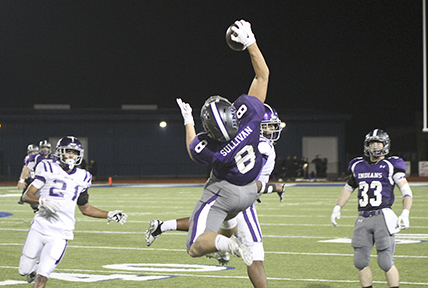 Caisen Sullivan of PN-G makes a one-handed grab against Angleton on a second-quarter touchdown run Friday night in Mont Belvieu. (Tommy Mann Jr./Special to The News)

MONT BELVIEU — Senior Adam Morse threw for three touchdowns in his final game in a Port Neches-Groves uniform. However Angleton’s Billy Foster countered with a five-touchdown night on the ground to lead Angleton to a 48-30 playoff win Friday night at Eagle Stadium.

“Give Angleton all the credit, they played a good game,” said PN-G coach Brandon Faircloth. “They are a great team. We made some errors tonight and turned the ball over a little bit. We just came up short tonight.

“I can’t say enough about how our guys fought. We got down and they showed their pride and their character by never giving up. They played hard to the final whistle. That’s how PN-G Indians teams play.”

Morse completed 22 of 33 passes for 255 yards on the night to lead the Indians. Senior Kody Cropper added 104 yards on 17 carries to lead the ground attack. PN-G racked up 366 yards of total offense, but the Wildcats ground game was too much to overcome.

Already leading 28-10 to start the second half, the Wildcats scored the only points of the third quarter. Jordon Allen’s second interception, which occurred when Morse was hit while trying to throw the ball downfield, set up the Wildcats at their own 42. Foster took the carry and raced 58 yards for the score to give Angleton a 35-10 lead with 7:24 left in the third quarter.

PN-G (9-3) answered back with a score on the first play of the fourth quarter. Morse hit Keynel McZeal for an 8-yard touchdown to make the score 35-17 with 11:55 remaining in the game. The six-play, 30-yard drive was set up by a 16-yard punt by the Wildcats.

Austin Hughes recovered the onside kick on the ensuing kickoff to give the Indians the ball at the Angleton 47. Facing third-and-20, Morse hit Cropper on a middle screen pass for 21 yards to the Wildcats 36. Morse hit Giblin for 24 yards to the 6. Cropper capped the drive with a 5-yard TD run. PN-G failed on the two-point conversion, which left the score 35-23 with 8:45 remaining.

As they did all night, the Wildcats had a quick answer. On the ensuing drive’s second play from scrimmage, Foster raced 72 yards for a touchdown as Angleton stretched its lead to 42-23 at the 8:04 mark of the fourth quarter.

The Indians refused to go away. Morse hit Noah Graham for 11 yards to get the scoring drive started. Cropper reeled off consecutive runs of 8, 12 and 4 yards to put the ball at the Wildcats 21. Morse and Graham connected again, this time for a 21-yard scoring strike to make the score 42-30 with 6:01 left in the contest.

Angleton, after recovering the onside kick attempt, responded with an 8-play scoring drive that took 4:14 off the clock. Foster capped the drive with an 8-yard TD run, his fifth of the game, to push the lead to 48-30 with just 1:47 left in the game.

“I can’t say enough about our team, I’m so proud of them,” said Faircloth. “They had their ups and downs, and to come back and be co-district champs and get a bi-district championship, that hasn’t been done in a while. These seniors have left their mark on the record books and set the bar really high. It was a joy and an honor to coach them.”

PN-G took the opening kickoff and marched to inside the Wildcats 10-yard line. Morse hit Graham for 11 yards on third down. Cropper had consecutive runs of 5 and 12 yards to put the ball at the Angleton 32.

Morse hit Caison Sullivan for 12 yards to the 16. Cropper’s 7-yard run put the ball at the Wildcat 9. That’s where the drive stalled and the Indians had to settle for a Gunnar Nicholson 32-yard field goal.

It didn’t take long for Angleton to respond. Foster scored on a 63-yard run on the Wildcats first play from scrimmage to give Angleton a 7-3 lead.

The Indians turned the ball over on their next possession. Morse hit Giblin for a 5-yard gain, but Giblin fumbled the ball, which was recovered by the Wildcats’ Koy Richardson.

Angleton marched 52 yards in seven plays to increase its lead to 14-3 with 2:52 remaining in the first quarter. Bo Buckley had a 21-yard run and Foster carried the ball three times for 20 yards. Chris Kocurek capped the drive with a 1-yard quarterback sneak.

After forcing a quick three-and-out by PN-G, Angleton went back to work on offense. Foster carried for 34 yards to the Indians 30. After Seth Cosme hit My’Kell Ross for a 15-yard completion, Foster closed out the five-play drive with a 7-yard touchdown run to put Angleton up 21-3.

Morse was intercepted by Allen on the ensuing possession for the Indians. Cosme hit Jason Waddy for 31 yards to the PN-G 18. Kocurek called his own number again on third-and-goal from the 1 to give the Wildcats a 28-3 lead with 7:45 left in the second quarter.

PN-G put together another scoring drive late in the second quarter, taking advantage of a 5-yard punt to give the Indians the ball at their own 44. Morse hit Sullivan for a 16-yard completion and followed with a 30-yard scoring strike to Giblin to cut the Wildcats lead to 28-10 with 3:49 left in the first half.

Past successes don’t count in Dogs-Horns

George Ranch has fallen short of the state semifinals each of the past two seasons, but the Longhorns are still... read more