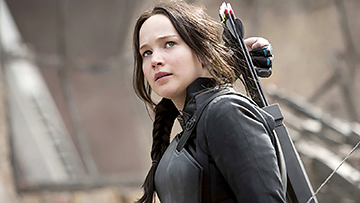 Jennifer Lawrence as Katniss in “The Hunger Games: Mockingjay — Part 2.”

THE MOVIE GUY: ‘Games’ goes out with a dark bang

The last installment in “The Hunger Games” series arrives without any preamble, thrusting viewers right back into the story mere moments after the last film ended. Fans of the movies shouldn’t have any trouble getting back up to speed, although this is certainly not an appropriate entry point for those who haven’t seen the previous films.

The story is much darker and fairly complex in this franchise finale, which is how things should be. This may have started out as a young adult fantasy adventure, but the target audience has matured and the films matched that growth by offering more-complex themes along with a dark, nearly fatalistic tone, which is entirely appropriate in a story about civil war and children being forced into gladiatorial combat.

The end result is a film that still offers a nice mix of action and character moments stuffed into a deliberately paced climax that left me wanting more.

For those who do need a reminder of what’s going on, Katniss (Jennifer Lawrence) is still waging war on the Capitol and ruthless President Snow (Donald Sutherland), but she’s not really comfortable being the mere face of the rebellion. The main thrust of this film follows her as she slips free from her handlers and heads toward the final confrontation with Snow. The streets of the Capitol have been mined with futuristic booby-traps, giving the filmmakers plenty of opportunities for action.

It’s all quite grim, and some of this will raise eyebrows for parents with younger kids. A tunnel deathtrap when our heroes are attacked by a slithering mutant hoard reminds me of something that would fit nicely into an R-rated zombie movie or perhaps a “Game of Thrones” episode.

The story also deals with darker, grown up ideas, showing Katniss and the other rebels struggling to hold on to their ideals while facing the onslaught of war. They become jaded as they start to see the puppet strings behind their propagandistic campaigns, forcing them to grapple with the troubling idea that Katniss may be more valuable as a dead Martyr than a living soldier. This is obviously a far cry from the simplistic issues that dominated at the start of the series.

Jennifer Lawrence is more than up to the task of playing these complex issues while still maintaining her popcorn appeal. We knew that she was a good actress before “The Hunger Games” began, but I doubt that anyone truly saw that she would be so adept at bringing genuine acting ability into what could have easily been a throwaway young adult franchise.

There’s a reason why “The Hunger Games” eclipse the “Maze Runner,” “Divergent” and other young adult series is terms of quality and fan loyalty. Credit Lawrence, her talented supporting cast and the filmmaking team for giving us a franchise finale that should please fans of the books and leave them wishing for additional adventures in Panem.

The 2010 Copiapó mine collapse made for riveting television, as viewers around the world watched as rescuers tried to free... read more