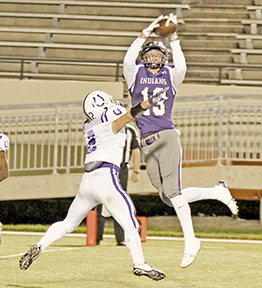 • Seating: PN-G fans on home side

• Next for winner: College Station-North Forest winner in regional semifinals

PORT NECHES — The Angleton Wildcats might be 6-5 heading into the second round of the playoffs, but the team has the full attention of Brandon Faircloth and his Port Neches-Groves Indians.

PN-G meets Angleton at 7:30 p.m. at Barbers Hill High School in Mont Belvieu. The Indians are the home team.

When the seventh-year PN-G coach was reminded of Angleton’s record, he let out a laugh before describing what he sees in the Wildcats.

“They have lost to four top-15 teams in the state,” Faircloth said. “Their strength of schedule is No. 1 in Texas, I promise you. Nobody has played Crosby, Port Lavaca Calhoun, Foster and George Ranch. Those four teams beat 95 percent of all the teams in Texas.

“They have our attention. Coach (Ryan) Roark have a great program over there. We have our hands full. There is no doubt about that.”

Roark said there is more than one reason why the Wildcats stand at 6-5 heading into the second round.

His Wildcats took on Crosby in the second week of the season with 11 starters out due to injuries. The Wildcats had eight starters out the next week against Houston Chavez and the following week were missing seven guys.

“We have been behind the eight ball all season,” Roark said. “We were so snake bit early on in the season. We are as healthy right now as we have been all year. There was a point where we were just trying to survive. We have used eight different line-ups on our offensive line. It is no excuse but it is just the season we have had this year.”

To put the Wildcats injuries into even more perspective, 10 different players have 10 or more carries for Angleton this season.

Angleton found a way to win District 24-5A and then defeated Texas City, 21-14, last week in the bi-district round.

Billy Foster leads the Wildcats with 516 yards on 60 carries with eight touchdowns. Zekoma Hall has 377 yards on 71 totes with five scores. Seth Cosme comes into the game with 1,040 yards on 63-of-111 passing with six touchdowns and five interceptions.

Faircloth compared Angleton’s offense to Lumberton and Vidor since the Wildcats run a Wing-T formation. He said the defense compares to Beaumont Central and Beaumont Ozen.

“It looks like there is 15 of them out there,” Faircloth added.

“Our mood has been great,” Faircloth said. “I am just happy for our kids and their parents. Being a football player at PN-G is not easy. It is a hard thing to do. The time our kids put in for our program is second to none. To see that hard work pay off is why I got into coaching. Last Friday was an amazing night.”

NOTE: Angleton stats via chron.com and through 10 games

• Angleton coach Ryan Roark: “We expect a hard-fought battle. When I look at PN-G on video, I see a very disciplined football team. They have an explosive running back, great passing-catching receivers and a great quarterback. Their defense is filled with guys who play their tail off. We expect a big crowd Friday. I am a historian of Texas high school football and am a coach’s kid. I was at the PN-G state title game in 1999 and actually sat by Bradley Peveto, who is from Orangefield and coached at Northwestern [State] and is now at LSU. They packed the stands at the Astrodome.”