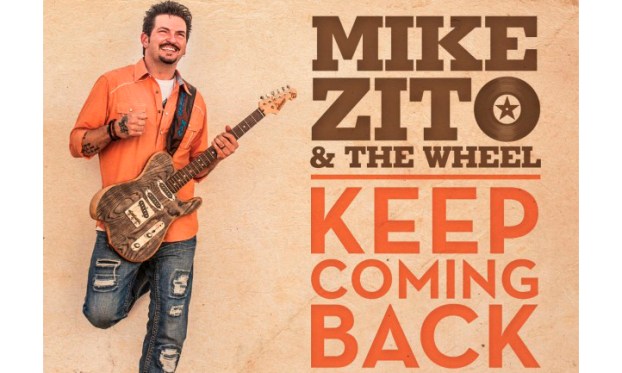 Instead of getting dressed and going out this weekend, why not stay home and enjoy good music from Nederland’s own Mike Zito.

The popular blues/country/rock singer and writer released a new album this month and returned home Monday from a five-week overseas tour.

The News caught up with Zito on his birthday Thursday morning before he took the stage at The Bayou Club later that night for a Birthday Bash.

“I am playing tonight with good friend Scott McGill, so that is really fun,” Zito said.

“Keep Coming Back,” features Andres Osborne and was produced by Trina Shoemaker.

The album’s title comes from a saying Zito has heard repeatedly the last decade or so.

“That’s a saying from a recovery program I am in. They say, ‘You need to keep coming back.’ I’ve been clean and sober for 12 years now, you hear it over and over,” he said.

The saying’s powerful message inspired Zito first to write a song about it, then expand it into an album title.

The new album contains some of the best songs Zito has written, and is produced by Trina Shoemaker, a Grammy winning producer who worked with Sheryl Crow.

“Stylistically, it is right on par with what I like to play, but working with Trina it has a more modern sound quality,” he said.

During his tour overseas, Zito played at venues in The Netherlands, Norway, all over England, and Germany.

People from The Netherlands loved that he was from Nederland, he said.

Zito admits he’s not a native Texan, but he couldn’t be more Texas proud if he’d been born and raised in the Lone Star State.

Zito may not have ever made it to Texas if not for a chance meeting with Laura, the Texas woman who would become his wife.

“My wife, who is from Nederland, was in the St. Louis area visiting her mother. She saw me playing in St. Louis, we became friends, so when I got to Texas for a job, I called her,” he said.

And, the rest is history. The couple just celebrated their 10-year reunion.

Zito recently had occasion to reflect on what he holds dear — his wife and their five children.

While playing in The Netherlands, the Paris terror attacks occurred.

“That was horrible. Luckily, we were not near there, about four hours away, but I did have musician friends on tour in Paris. I worried they might start closing all the airports down and I we might not be able to get home,” he said.

Though his heart goes out to those killed and injured in Paris, Zito said he is happy to have made it home to Nederland.

“Because we have small kids, it is really nice to see all these wonderful places, but it is great to come home to a nice small town and just relax,” Zito said.

For those who missed Zito at his Birthday Bash, he’ll be playing again in the Golden Triangle Thanksgiving weekend on Nov. 27 at The Gig in Beaumont.

“I’ll be playing with Becky Barksdale and Scott McGill. I get to come back home and play with all these great musicians,” he said.

For more information about Zito’s new album, or to learn more about the artist visit: