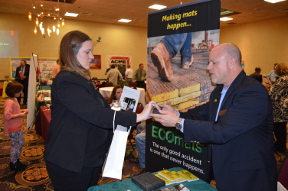 It was all about networking Thursday at the Park Central Holiday Inn in Port Arthur.

There, new Greater Port Arthur Area Chamber of Commerce members set up booths to spread the word that they were ready to do business in the city by the sea.

About 30 new members participated in the Chamber’s 2015 New Member Showcase.

Bill McCoy, Chamber president, described the night as a business-to-business expo where new members get a booth for free.

“If they contact everyone in the room, they will find a customer,” McCoy said.

Hadley Cohen, with Tiger Industrial, an industrial rental company with an office in Beaumont, manned a booth with information about Ecomats.

Hadley had opportunity to tell those in attendance about the attributes of the Ecomat.

“They are a safer, environmentally friendly alternative to the traditional wood mat,” he said.

As a new Chamber member, Hadley said the company was able to get its name out to potential new clients.

“Everybody here is so nice; it’s a good opportunity to network,” he said.

Though the company is not new, the owners, Rae Lynn Guerrero and Stacy Kuykendall, are.

The co-owners said the night provided a good opportunity to tell others about their business and what they have to offer.

The night, she said, was great.

“A lot of board members have reached out to us and asked if there was anything we need,” Guerrero said.

Eric Meyer, rescue manager with First In Rescue Safety Training, said the event offered the Deer Park company a chance to expand their business outside of the Houston area into Port Arthur.

“We are here to do some networking. We’ve done a few tank farms down here, but hope to expand,” he said.

Paul Chargois, director of the Chamber’s Executive Board, said he was pleased with the turnout.

“It is great to see continued growth in the Port Arthur Chamber of Commerce. Tonight’s event is indicative of that with lots of new members and positive interaction,” Chargois said.

Carleton Edwards, 49, the former superintendent of the Streets Division for the city of Port Arthur, was arrested Thursday on... read more