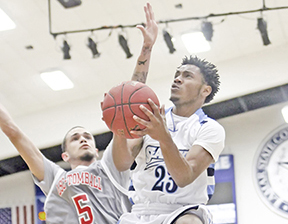 The Lamar State College-Port Arthur Seahawks finished off their three-game home stand with a victory Wednesday night.
LSC-PA survived a hot shooting, first half by the Lone Star College-Tomball Timberwolves to win 84-65.
The Seahawks (3-2) trailed 45-43 at the half mainly because the Wolves drained eight three pointers in the game’s first 20 minutes.
LSC-PA’s defense tightened up in the second half and gave up only one trey in the entire second half.
Freddie Williams Jr. led the Seahawks with 27 points on 12 of 16 shooting to go with 12 rebounds.
Not only was Williams’ best game of the season, LSC-PA called it the best game of the sophomore from San Antonio’s best game as a Seahawk period.
“We had to go in the locker room and get focused,” Williams said. “We had to wake up because we were playing at their level. We know we can play at a fast level. I know I am a motivational person and I knew I had to do something to motivate us to a win.”
Williams’ two ally oop dunks in the game thrilled a Homecoming crowd. The final one came late in the second half as Mambi Diawara passed to Jordon Harris who threw the ball up for Williams to dunk. The slam gave LSC-PA a 76-58 lead.
“I was hyped for that last one,” Williams added. “I told myself I was going to go ahead and do it for the fans for Homecoming.”
Tomball shot 16-for-27 in the first half and Tomas Hernandez hit five three points himself in the first 20 minutes.
Two of Hernandez’s threes came right as the shot clock expired.
The Seahawks took the lead for good when Diawara drained a three pointer early in the second half to give LSC-PA a 48-46 advantage.
After a Tomball free throw the Seahawks went on a 11-0 run to stretch the lead to 59-47.
Nederland graduate and LSC-PA sophomore Colton Weisbrod had five points in the run and finished with 15 points and six rebounds.
Harris finished with 11 points and 10 assists while Diawara and Marko Zelic each had 10.
“In the second half we played better defense,” LSC-PA coach Lance Madison said. “We got out and pressured them. I thought we competed better in the second half. Our goal going into the game was hold them under 60 and they had 45 at half and then ended up with 65.
“That is probably the best game Freddie has had in his career. I got on to him at practice this week and challenged him a little bit. I wanted to bring the best out of him. He had some confidence out there tonight. I was impressed with his rebounding and defense, too.”
The Seahawks start Region XIV play this Saturday at 4 p.m. at Paris Junior College. Paris was picked to finish fifth in the North Zone in the coaches’ preseason poll.

PORT NECHES — There is no success at Port Neches-Groves without the play of a group of guys who hardly... read more