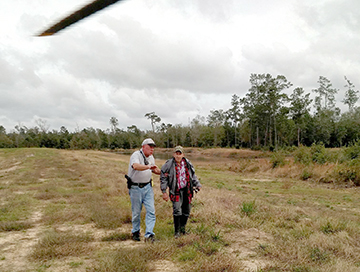 A deputy helps Ruben "Dan" Clubb after he was located following a missing persons report.

Earlier on Monday the Jefferson Sheriff’s Office was called to help find 81 year old Ruben “Dan” Clubb, who had walked away from his home on FM 365 in the western part of the county into the woods by his residence.

Clubb suffers from Alzheimer’s and had not taken his medication. Once deputies were on scene they realized the amount of area to search and requested the Aviation Unit to help search the area. The Aviation Unit responded with the Sheriff’s Department helicopter.   Once in the search area the Aviation Unit was able to locate Clubb about a mile from his residence.

They landed, picked up Clubb and gave him a ride to a field by FM 365 and Interstate 10 where they landed and handed Clubb over to deputies who reunited him with his family. Clubb was checked by medical personal on scene.