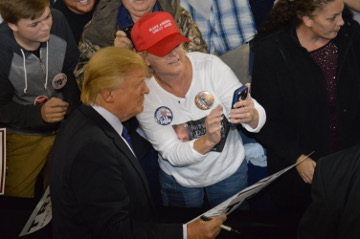 A woman takes a selfie with Donald Trump during his visit to Beaumont on Saturday. Mary Meaux/The News

The line to enter the building snaked down towards the fairground area as some, such as Helen Overall of Beaumont, took time to purchase a button or other memento from vendors affiliated with the Republican National Committee. 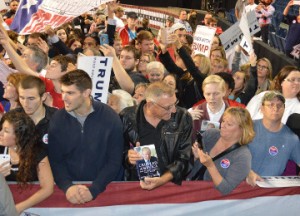 Clark Eastman of Lumberton brought along his children.

“We’re excited,” Clark Eastman said. “There has to be some kind of change.”

An area of the parking lot was set aside for protestors and around 9:30 a.m. Katelynn Bordages, Jeremy Marks and another man who said he was “a concerned citizen” held signs. 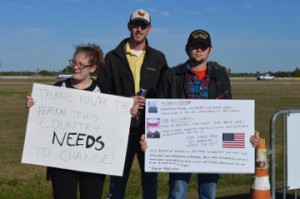 Bordages’ sign said “Trump, you’re the reason this country needs to change,” while the concerned citizen held a sign with the names and photos of Alfred Rascon who was awarded the medal of honor during his service in the Vietnam War and Jose Guiterrez who died in a fire fight in Iraq in 2003. Rascon’s family came to the U.S. undocumented from Mexico, the sign read. Guiterrez’s parents died and he traveled 2,000 miles alone at the age of 14 from Guatemala undocumented.

“Are these men not American enough?” the sign read. 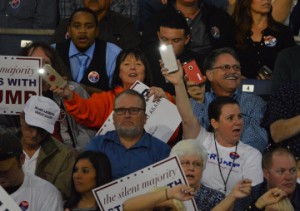 The crowd breaks out their cell phone lights to the song “Hey Jude” while waiting on Trump’s arrival.
Mary Meaux/The News

Inside the facility the tone was different from the protestors. B.J. Myers of Hull said it’s time for a change. Monica Doehrmann is also a supporter of Trump.

BEAUMONT — Presidential candidate hopeful Donald Trump was met by thousands of eager fans — and some protestors, during his... read more