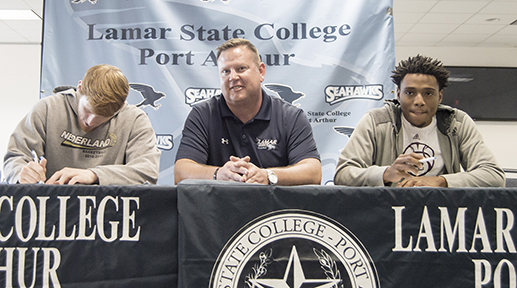 The day came Thursday when Lamar State College-Port Arthur sophomore Colton Weisbrod could finally talk about how it felt to soon be a Lamar University basketball player.

Weisbrod signed his National Letter of Intent on Thursday to play for the Cardinals next season. He transferred from the University of New Orleans after one season to LSC-PA after the birth of his son, Wake, this past April.

“It seems like it has been a long road to get him here,” Lamar coach Tic Price said. “I have always been a fan of his. He had to man up and be a father, and that speaks volumes about him as a person.”

Weisbrod said the journey to Lamar University from Nederland High School was not the path he always thought he would take, but he appreciates every step.

“Coming back home and being with my family, it is going to be pretty cool to look up in the stands and see them,” Weisbrod said. “To see my little boy and parents, it’s exciting. When I came home, first thought in my mind was staying close to home and being around my boy. This was the end goal. It might not have been the route I expected, but I am glad it ends this way.”

Weisbrod played in 23 games while at UNO and started 12 times. He averaged seven points with 72 rebounds and 14 steals. He scored 39 points Wednesday in the Seahawks 103-87 victory over Houston Community College.

He is currently averaging 26.3 points per game, which ranks him fourth in the nation in the National Junior College Athletic Association. He was his twice named his district’s MVP in high school and was named the Class 4A Player of the Year his senior season.

Teammate Jordon Harris, a native of San Antonio and graduate of Sam Houston High School, is averaging 15.5 points a game in his second year with the Seahawks. He was named to the Texas Association of Basketball Coaches all-state team as a senior.

“It is a stress reliever to sign today,” Harris said. “It caps all the hard work I put in through the years. I guess it is finally paying off. I like the coaching staff at ULM and the players. I really got along with all them. It is like I have been knowing them for a very long time.”

Harris will have some famous Warhawks alumni to impress when he plays his first game. The Robertson family of the popular show “Duck Dynasty” has strong ties with the campus.

“I got a chance to go see the family house,” Harris said. “It is a pretty nice house, too.”

Harris said he would not grow his beard as long as Phil, Willie or Jace Robertson.

The current Seahawks duo are the 16th and 17th players in LSC-PA history to sign Division I scholarships.