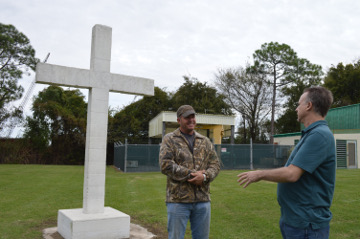 Port Neches-Groves High School graduate and Sulphur, La. resident Kip Coltrin, left, speaks with the Rev. David Birdsong of Southside Baptist Church at the cross at Port Neches Riverfront Park on Friday. Coltrin has vowed to “Stand to Post” before the cross after learning the Freedom From Religion Foundation is asking the city to take the cross down or move it to private property. Mary Meaux/The News

PORT NECHES — Kip Coltrin is ready to stand for his beliefs.

The Sulphur, La. resident arrived at Port Neches Riverfront Park amid fall temperatures with a brisk wind blowing and walked across the grass to stand, literally, in front of the 10-foot cross at the park Friday afternoon.

Coltrin, a 1992 graduate of Port Neches-Groves High School, wants to see other Christians take time to stand for the cross.

Mid-County residents are banding together in an effort to keep the cross at Port Neches Riverfront Park.

The cross has stood on the river side of the park, located at the corner of Merriman Street and Grigsby Avenue, for 45 years. On Thursday Port Neches Mayor Glenn Johnson informed the Port Arthur News of a letter he received from the Freedom From Religion Foundation calling for the removal of the cross.

A Facebook group called “Port Neches Christians and Advocates for The Cross at Port Neches Park,” is quickly filling with members and at 2 p.m. Sunday, Nov. 15 there will be a prayer vigil at the cross, according to the site.

The Facebook page was started by Kay Bernard and friend David Hager is assisting as administrator and was created as a way for those of like views to keep in contact, find out what’s going on and maybe organize related events, Hager said.

Rebecca S. Markert, staff attorney with the Freedom From Religion Foundation, said the organization was contacted by a concerned citizen from the city of Port Neches at the end of October.

FFRF is asking the city of Port Neches to remove the cross immediately or direct the display be moved to a more appropriate private location. They also asked to be informed in writing of the steps being taken in the matter, according to the letter sent to the mayor.

“The government’s permanent display of a Latin cross on public land is unconstitutional. The inherent religious significance of the Latin cross is undeniable and is not disguisable,” according to the letter signed by Rebecca S. Markert, staff attorney for FFRF. “No secular purpose, no matter how sincere, will detract from the overall message that the Latin cross stands for Christianity and that display promotes Christianity. The display of this patently religious symbol on public property confers government endorsement of Christianity, a blatant violation of the Establishment Clause.”

The letter goes on to state the cross conveys a message to non-Christians, including one in five Americans who are not religious, that are “not favored members of the political community” and causes an exclusionary effect and makes non-Christians and non-believing residents of the city political outsiders.

The matter has been referred to the city’s attorney for review.

Numerous people have since contacted Port Neches City Hall regarding the cross and its fate.

“City staff as well as members of city council have received a significant number of phone calls regarding the issue of the cross in the park,” Port Neches City Manager Andrè Wimer said.

The Rev. David Birdsong of Southside Baptist Church in Port Neches is pastor and friends with the administrators of the Facebook page and said he and other pastors will likely work together on a rally for the cross in the near future.

“There will always be someone offended by something,” Birdsong said. “I don’t think we’re obligated to cater to those who are offended as is in this case.”

The words “one nation under God” has been part of the Pledge of Allegiance since the 1950s with the insistence of President Dwight D. Eisenhower and the founding fathers referenced God five times in the Declaration of Independence, he added.

“If you want to be atheist or anti-God that doesn’t mean the rest of us have to give up personal items of faith,” he said.

Linda Clearman, who was a Port Neches resident for nine years, reached out to the Port Arthur News via e-mail regarding the cross issue. She hopes Port Neches City Council as well as the city does not give in to people who are complaining about the cross and “evidently go around the country looking for something that offends them.”

“There are absolutely more than 23,000 people across the country that are not offended by crosses and definitely more than 1,000 in Texas that do not find crosses offensive,” Clearman said quoting statistics for FFRF membership countrywide and statewide. “I strongly urge the citizens of Port Neches to stand strong against these FFRF people … who it seems do not even live there, yet looked until they found something that offends them. This ‘protesting anything that I don’t like’ is getting really ridiculous.”

Meanwhile, Coltrin is ready to continue his Stand to Post. He spent about three hours at the cross Friday and asked, via the Facebook page, for others to come and stand for an hour.

“I accepted Christ in 1995,” Coltrin said. It hasn’t been peachy keen nice but you weather a storm to share a rainbow.”

Coltrin said it’s time for people to take a stand.

The large cross in Port Neches Riverfront Park has been the site of Easter Sunrise Services for a number of years before the service was moved to the nearby pavilion, according to information from the city of Port Neches. The stone and mortar cross was placed at the park by Mrs. Conrad Miller, according to the March 11, 1973 edition Port Arthur News. Johnny Coward, owner of Tri City Concrete Company and Bob Bailey, of Bailey Masonry Inc., constructed the cross, according to information in a newspaper titled The Chronicle dated Feb. 18, 1970. The cross was completed in March 1970 and about 600 people were in attendance at the service.

PORT NECHES — The Freedom From Religion Foundation is asking for the removal of a cross at Port Neches Riverfront... read more