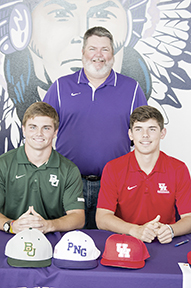 It was a special day Thursday when the buddies joined their family and classmates at Port Neches-Groves High School to sign National Letters of Intent together.

Leckich signed with Baylor University and Henry inked with the University of Houston.

It has been a long road for Leckich, who committed to the Bears as a sophomore and then only pitched four innings due to an arm injury as a junior.

In those four innings last season, he struck out 11 batters and gave up only one hit. He threw 48 1/3 innings as a sophomore and finished with a 1.88 ERA and 75 strikeouts with 27 walks.

“The football team right now at Baylor is amazing, so that doesn’t hurt,” Leckich said. “The campus, it is just an awesome place to be.”

Leckich will not be the only former Indians player to be on the Bears roster next season. Austin Stone is also at Baylor along with Bridge City graduate Matt Menard.

“Austin and I are close and we have been talking,” Leckich said.

Leckich stuck with the Bears even after a coaching change this season from Steve Smith to Steve Rodriguez.

“I did want to talk to the coaches and see what they would think,” he said. “Once I talked to them and they said they would honor the scholarship, I had no problem at all. That is always where I wanted to go. I was committed to the school. I didn’t play basically the whole summer. For them to stick with me was really awesome.”

He chose the Cougars because of how close the school is to PN-G.

“I like how my family can come see me at anytime,” Henry said.

Houston won the American Athletic Conference title last year and in 2014 was an NCAA Regional champion.

“They have a great program,” Henry said. “I could see in the near future going to Omaha. Playing baseball for a Division I program, you can’t ask for anything more.

“It means a lot to sign on the same day as Ryan. We have been playing baseball together or against each other since we were nine. It is awesome.”

Henry said now with Thursday out the way, he and Leckich can turn their focus towards helping the Indians win a district title.

“It is nice to be done with it,” Henry added. “It is definitely something that added a lot of stress.”