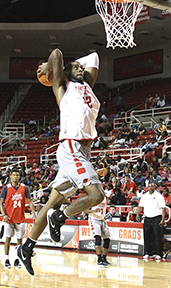 LeMon Gregory and the Lamar Cardinals gave locals their own preview of the upcoming season Nov. 3 in a Red-White scrimmage. (Tommy Mann Jr./Special to The News)

BEAUMONT — Second-year Lamar men’s basketball head coach Tic Price leads his youthful squad into a new season tonight when the Cardinals tip off against Austin College in the Montagne Center. The season opener will be LU’s lone home game until Nov. 29.

The Cardinals are looking to build off the momentum of last season that saw them more than double their win total from the previous two years combined, on their way to recording the nation’s 11th-best single-season turnaround. To improve upon last season, the Cardinals will have to do so with a very young lineup.

Big Red enters the year having to replace its top three scorers, top two rebounders and its top shot-blocking threat from last season. Included among the losses are 2015 All-Southland selections Anthony Holliday and Tyran de Lattibeaudiere. LU returns only seven letterwinners from last season, and comes into the year with seven new players including five true freshmen.

“Our goal is to build on what we were able to accomplish last season,” said Price. “We have a lot of new faces on this team, so we are going to be teaching more. What everyone has to understand is there is going to be a maturation process with these guys. Having said that, now that the season is here they will be thrown into the fire and they have to be ready to go.”

The Cardinals top returning scorers are senior Dontavious Sears and junior Marcus Owens. A former junior college transfer from the Memphis area, Sears played in 29 games last season all in a reserve role averaging better than 7 points per game, while Owens scored 6 points per game and returns a team-high 3.6 rebounds per contest.

The Cardinals will be looking to capture the early-season magic that has surrounded the program throughout its history. LU is 45-19 (. 703) all-time in season-opening contests, and that number jumps to a near perfect 33-3 (.917) when opening a season at home.

The Cardinals opponent, Austin College, struggled to an 8-17 (.320) overall record in 2014-15, and finished the year eighth in the Southern Collegiate Athletics Conference with a 3-11 (.214) mark. Even more worrisome for the Roos was their struggle on the road last season. Austin College was just 1-9 (.100) in away contests, compared to the Cardinals who were 12-2 (.857) in the Montagne Center.

LU enters 2015-16 with raised expectations. The Cardinals were picked fifth in a preseason poll of the Southland Conference head coaches. The SLC media relations directors slotted the Cardinals sixth in their preseason poll.

“I’ve never really paid too much attention to the polls,” said Price. “I just look at each opportunity as it presents itself. When we get into conference play, I want to make sure that we are in the right mindset and that we capture that moment. The polls will take care of themselves as we go through the season.”