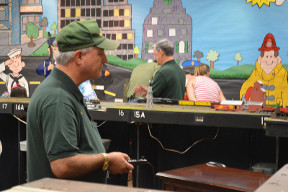 Randy Williamson with East Texas and Gulf Rail Modelers Association, works the controls on model trains during Model Trains In (Loco)motion during the August exhibit at Effie and Wilton Public Library in Port Neches.

Model train exhibit back in Port Neches this weekend

Model train enthusiasts, or those who would like to be, can see the latest diesel locomotives and vintage steam locomotives on display this weekend.

For the second time this year, the East Texas and Gulf Rail Modelers Association will bring their model train exhibit to the Effie and Wilton Public Library, 2025 Merriman St. in Port Neches.

“There are people who did not get to see last time and heard about it last time,” Patty Odgen, assistant librarian, said. “Plus, the fact that it is National Model Railroad Month, well, you just can’t get enough trains.”

Members of the group will operate modular HO-scale model trains that include the latest diesel locomotives and vintage steam locomotives, all pulling fleets of club cars, grain hoppers, coal cars, and other specialized equipment.

“This is a perfect way to mix Railroad Month and the holidays,” Les McMahon, association secretary/treasurer and show organizer, said.

The show is free, and geared for people of all ages, young and old alike.

For the younger set, a Thomas the Tank engine will be on display.

“We have a lot of people come out and we discovered a lot of guys that are lone wolves or closet model railroaders that we are happy to see have the same affliction. It is delightful to see the expression on kids faces,” McMahon said.

Typically, the model train association does about three to four shows a year: DeQuincy Railroad Days, Tyler Train Show, a show in Longview and the Galveston Train Show.

McMahon said the association did a show in August at the Port Neches library after they were asked to set up a display on railroads in the building’s foyer.

“I took the extra step and said, ‘What if we do a train show,?’” he said. “We had a real good crowd, about 350 people came through which is a lot more than I thought.”

It’s common for association members to be asked by novices for advice about buying a train set, McMahon said.

The East Texas and Gulf Rail Modelers Association has 19 members mostly from the Golden Triangle.