PORT NECHES — The Freedom From Religion Foundation is asking for the removal of a cross at Port Neches Riverfront Park.

City leaders received correspondence earlier this week from the group objecting to the display of a cross on public property.

“FFRF is a national nonprofit organization with 23,000 members across the country, including nearly 1,000 members in Texas. FFRF’s purpose is to protect the constitutional principle of separation between state and church,” according to the letter addressed to Port Neches Mayor Glenn Johnson.

The 10-foot tall white cross stands near the riverside of the park. There is no writing or engraving on the cross.

According to the letter, a concerned citizen brought the issue to the group’s attention.

Johnson said there are some unknowns regarding the issue.

“City Council is in consultation with the city attorney regarding the letter,” Johnson said.

The FFRF said the Latin cross is a principal symbol of Christianity around the world and “display of the cross alone would not reasonably be taken to have any secular point,” according to the letter which cites Capitol Square Review and Advisory Board v. Pinette, 1995.

The letter goes on to state a majority of federal courts have held displays of Latin crosses on public property to be an unconstitutional endorsement of religion.

“The government’s permanent display of a Latin cross on public land is unconstitutional. The inherent religious significance of the Latin cross is undeniable and is not disguisable,” according to the letter signed by Rebecca S. Markert, staff attorney for FFRF. “No secular purpose, no matter how sincere, will detract from the overall message that the Latin cross stands for Christianity and that display promotes Christianity. The display of this patently religious symbol on public property confers government endorsement of Christianity, a blatant violation of the Establishment Clause.”

The letter goes on to state the cross conveys a message to non-Christians, including one in five Americans whoa re not religious, that are “not favored members of the political community” and causes an exclusionary effect and makes non-Christians and non-believing residents of the city political outsiders.

The large cross in Port Neches Riverfront Park has been the site of Easter Sunrise Services for about 45 years and was placed at the park by Mrs. Conrad Miller, according to a Port Arthur News article that ran in the March 11, 1973 edition. Miller was chairman of Cultural Affairs and Fine Arts committee of the Port Neches Chamber of Commerce.

The cross was constructed of stone and mortar by Johnny Coward, owner of Tri City Concrete Company and Bob Bailey, of Bailey Masonry Inc., according to information in a newspaper called The Chronicle dated Feb. 18, 1970. The cross was completed in March 1970 and about 600 people were in attendance at the service. 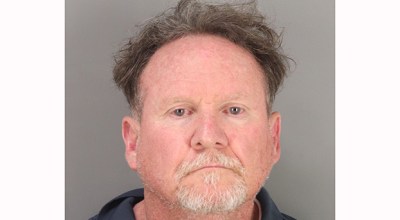