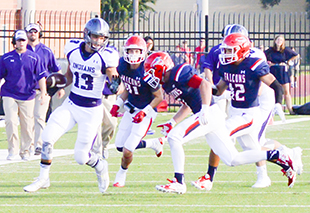 The Indians claimed a share of the District 22-5A title with the Nederland Bulldogs this year. It is the 24th district championship in PN-G history and first since 2009 when the Indians finished the year 11-1 in coach Brandon Faircloth’s first season on campus.

“That was the goal since I was a freshman,” Giblin said. “We wanted to put another number on the wall. Making that goal achieves everything our team has been working for.”

The Indians won the share with a 6-1 District 22-5A record, the same as the Bulldogs, whose only loss in league play was against Goose Creek Memorial. PN-G then defeated Vidor, 50-7, and Nederland took down Lumberton, 51-21, in the last week of the regular season.

“We had the mindset last week to come out with a win and we went out with a bang,” Giblin said. “Everything was clicking.”

Giblin had seven catches for 86 yards in the Indians win over Pirates. He scored on a 13-yard touchdown reception from quarterback Adam Morse.

Faircloth said he was proud to send out the Indians seniors on top of the district.

“At a place like PN-G with such a rich tradition, any time you can add to it, it is a really big deal,” Faircloth said. “PN-G has won a lot of them through the years. One of our goals is to be a district champion. Any time you can accomplish that, I am happy for the kids, our program and the coaches.”

PN-G found itself really motivated this past Friday against Vidor to win and claim its share of the title.

“We went over and played really well,” Faircloth said. “Vidor is a good team. We just happened to be clicking on all cylinders Friday night.”

To win a share of the title, PN-G did something not a lot of people expected the team to do coming into the season. The Indians were the top-ranked defense in District 22-5A.

PN-G’s defense allowed a league-low 262.3 yards and 14.4 points per game through the regular season. After giving up 30 to Nederland in the Bum Phillips Bowl, the Indians defense gave up 27 total points in its last three 22-5A games.

“There are a lot of great players in District 22-5A and really good coaches. To come out on top is something I am really proud of. Coach [Dustin] Templin had a great plan on defense every week and our kids executed it. We were able get turnovers and protect the ball. Our defense has played great and played inspired the last three weeks.”