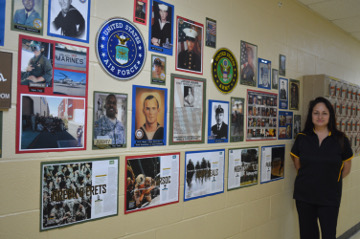 Kathy Pollock, YMCA member services director, stands near one section of a long wall honoring veterans at the facility. Pollock started the project four years ago that features photos of veterans, active and not, who are members, staff or family of members and staff. Mary Meaux/The News

Kathy Pollock has a special place in her heart for veterans.

Jody Holton, marketing director at the YMCA, has watched the veteran’s wall of honor grow during the past four years. 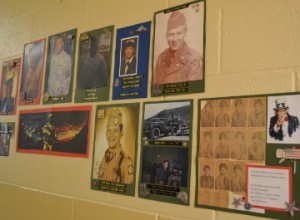 Photos of veterans, active and not, who are members, staff or family or members and staff are featured along the wall. Pollock color-coded the photos by the branch of he military the person served and added various stickers and patriotic symbols.

“This makes the members feel special seeing the wall,” Holton said. “They love it. They walk through and it takes them back.” 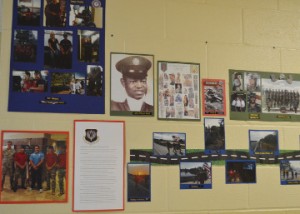 Pollock go the idea from a dream.

“I had a dream about it, envisioned it and when I woke up I thought, wow that’s a good idea,” Pollock said. From there she told a few people who all agreed.

So far there are about 120 photos of veterans along the wall and Pollock expects more to be added. Members and staff are welcome to bring their veterans photos in and the display will remains up through the month of November. 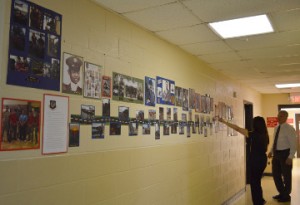 The YMCA will honor veteran’s on Wednesday, Nov.11 — Veteran’s Day, with a cake, refreshments and a chance to work out free of charge whether a member or not, Holton said.

Pollock walked down the hallway and pointed out her father, Gene Godrey. Godfrey, now deceased, was a U.S. Marine for more than 20 years.

The YMCA is military friendly, Holton said, and both Navy Seals and U.S. Coast Guard members train in the Y’s pool.

“It’s a big treat to able to provide the facility to them,” she said. 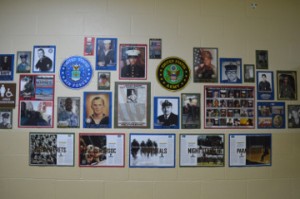 Last month a group of military members stopped by on the fourth Special Tactics Memorial March in remembrance of two Special Tactics Airmen who were killed Aug. 26 in an apparent insider attack in Afghanistan. The group made an 812-mile trek from Lackland Air Force Base through five states. And each member carried a 50-pound ruck sake and a commemorative baton with the name of a fallen Special Tactics Airman’s name.

Pollock followed their trek the Internet and added a special section on the wall featuring the remembrance walk.

The city of Port Arthur has issued a boil water notice as a result of a large water main... read more