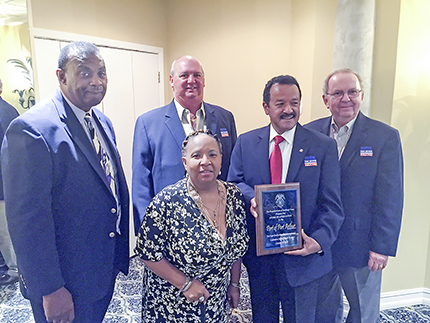 Special to the News

John Lovejoy, executive officer of the Port Arthur Marine Safety Unit, U.S.  Coast Guard, was master of ceremonies as the Port of Port Arthur, along with other area ports, was honored by the Propeller Club of Southeast Texas. The occasion was the Oct. 29 “Salute to the Ports of Southeast Texas” at the Pompano Club.

“Our ports, marine terminals, and waterway are a life-blood to our area,” said John Comeaux, Port of Port Arthur board president. “In tonnage alone our waterway ranks third in the nation. There is a significant amount of growth potential for our community on the horizon.”

“Our port works hard to make a difference in the area,” Comeaux said.  “It is really good to see how our area ports and navigation district work together for economic development and job creation for the region.” He noted, “It is a distinct honor to be recognized by the Propeller Club.”

Also recognized at the Propeller Club event were the Port of Orange, Sabine Pass Port Authority, Port of Beaumont, and the Sabine-Neches Navigation District.