McGallion retires as defensive coordinator; Criner to take over in interim 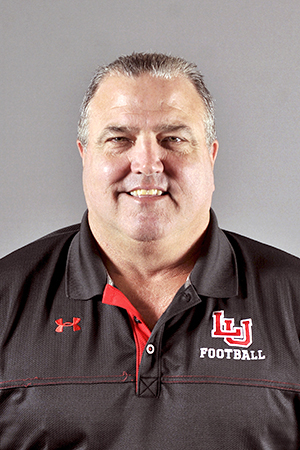 BEAUMONT — Lamar football coach Ray Woodard said he could not talk Craig McGallion out of retirement from coaching with two games remaining this season.

“This coming out of the blue yesterday, I didn’t have a plan for this,” Woodard said. “I wasn’t prepared for this and I don’t know if I handled this very well.”

Linebackers coach Mark Criner will take over the defense for the Cardinals’ final two games, this Saturday at Incarnate Word and at home against McNeese State on Nov. 21.

Woodard stressed it was completely McGallion’s decision to step down and there was no mutual agreement between the two for McGallion to do so.

“The fact is, he called the meeting and it was completely his decision. I spent most of the meeting trying to talk him out of it.”

McGallion, 55, had been with the Cardinals since the program restarted in 2010 and was linebackers coach for the first four seasons. He took over the entire defense for the 2014 season.

But McGallion’s relationship with Woodard runs much deeper than that.

“The McGallions and Woodards started in 1967, when his father hired my first cousin,” Woodard said. “We’ve had Woodards and McGallions at Silsbee ever since — one on each side there, right now. My other cousin Bobby [Woodard] is in his 32nd year there, and it’s the only job he ever had.”

Craig McGallion’s brother Bobby McGallion is the head coach at Silsbee. They and Ray Woodard, 54, a Corrigan native, have known each other since childhood, and Woodard said he and Craig have always talked about working with each other on a football staff if the opportunity arose.

McGallion was absent from the news conference. A phone number for him was not available, and players were not available for comment.

The Silsbee native had been a football coach since 1983, when he started out as a student coach at his alma mater University of Houston. He then served as an assistant at Clements High, Silsbee High, Texas A&M, Cy-Creek High and Cy-Fair High before taking his first head coaching gig at Woodville High in 1993. He became Barbers Hill’s head coach in 1995 and stayed until he took the defensive coordinator job at Silsbee in 1998, where he stayed through the 2008 season.

McGallion took over a defense that lost nine starters prior to the start of the 2014 season, when the Cardinals posted their first winning record (8-4) since their resurrection. That team held opponents to 354.2 total yards per game.

But the 2015 LU defense has struggled, especially at stopping the run.

Nicholls State, which entered Saturday’s game with a 291.4 yard-per-game average, almost doubled that and gained more than 400 yards alone in the ground game. Lamar’s defense is ranked ninth of 11 teams in the Southland Conference at 451.8 yards per game allowed (227.9 rushing, 223.9 passing).

Criner, who will turn 49 on Dec. 18, is in his second year coaching Lamar’s linebackers. The Boise State alumnus has experience in the professional ranks with the Las Vegas Outlaws of the now-defunct XFL and was defensive coordinator at Cincinnati, Middle Tennessee and Idaho as well as an assistant head coach at Idaho. He moved to Lamar from Eastern Michigan, where he was linebackers coach in 2013.

Another defensive coach on Lamar’s staff, line coach Carey Bailey, was head coach at Howard of the Mid-Eastern Athletic Conference from 2007-10.

Woodard said he is reaching out to the Teacher Retirement System of Texas to see exactly when McGallion can completely retire from all football duties, although McGallion will no longer coach. Until then, McGallion will be reassigned to non-sideline duties within the football program.

Not all is wrong with the Cardinals’ defense.

Junior defensive end Larance Hale was named to the College Football Performance Awards Defensive Lineman Award watch list, the CFPA announced Sunday. The first-year Cardinal from Tatum has averaged almost nine tackles per game in the past five games. He set a career high of 12 tackles against Northwestern State.

“This is Larance’s first season to play with us and he is having a great year,” Woodard said. “Every week he seems to get better and better. He brings a very aggressive style of play to our team, and I really enjoy watching him play.”