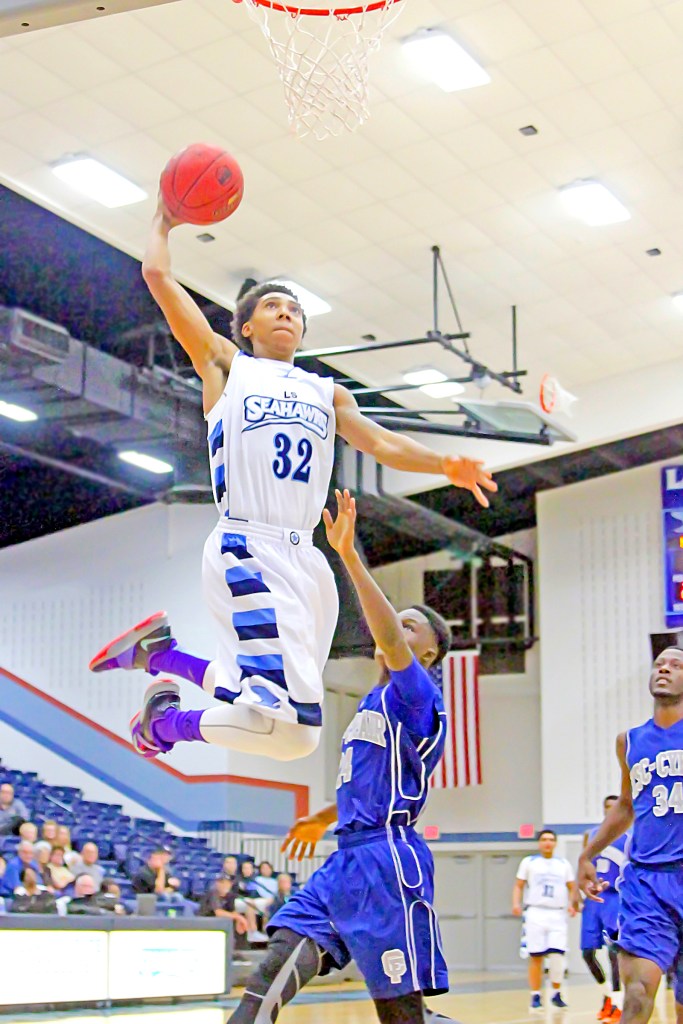 By Gabriel Pruett
The News sports writer
The Lamar State College-Port Arthur home opener was never in doubt.
LSC-PA never trailed to Lone Star College-Cy Fair on its way to a 102-56 victory behind a 30-point effort from sophomore Colton Weisbrod.
Weisbrod, who committed to Lamar University this week, shot 10 of 13 from the floor and 4 of 4 from the line to lead a Seahawks (1-2) team that shot 57.4-percent from the floor. LSC-PA was 35 of 61 shooting on the night and only missed 10 shots in the first half.
The Seahawks were 19 of 29 in the game’s first 20 minutes and led 54-27.
“We came back from Pensacola [Florida] and we had a more sense of urgency in our practices,” LSC-PA coach Lance Madison said. “I thought we put together three good practices and had some good leadership. We are starting to get healthy.”
Cy Fair (8-2) never had an answer for the Seahawks shooting.
Christian Albright finished 7 of 9 shooting for 18 points and was 2 of 3 from behind the arc. He also pulled in a team-high eight points. Freddie Williams Jr. added 13 points on 4-of-10 shooting while Jordon Harris was 3-of-6 from the floor for 13 points.
“After Pensacola I think we learned a lot about each other as a team,” Albright said. “We had our best set of practices this past week. That produced and it was good to do this before the home crowd.
“When we are hitting shots from the outside, it definitely makes it hard on a defense. The thing that got this game going was getting the ball early inside to Colton Weisbrod and myself. That opened it up for everyone else.”
Weisbrod scored 18 in the first half and Harrison had 10, nine coming off three, three pointers.
LSC-PA opened the game on a 15-3 run, aided by eight points from Weisbrod. The season’s first dunk at home was
delivered by Williams to give the Seahawks the 12-point cushion.
The Seahawks used a 7-0 run midway through the first to take a 28-11 advantage.
From then on, LSC-PA started to coast.
Williams dunk was not the only one for the Seahawks. West Orange-Stark graduate Chase Rutledge threw up a nice alley-oop late in the game for Gary Seniguar, who flushed down the game to give LSC-PA a 98-55 lead.
Rutledge then capped the Seahawks scoring with a three-pointer. He finished with nine points.
“Tonight felt great,” Rutledge said. “It felt like I was back at the gym in West Orange. This is what I love to do. We are all together. I have never been on a team that is so close. We have a few local kids on the team. Everyone plays for each other and we make the extra pass. We could do something this year.”
Rutledge understands the guards on the team have an easier job with the bigger players like Weisbrod and Albright knocking down shots.
“It is lovely,” Rutledge said. “They can play like a guard or post up. They make it easy for the rest of the us when they attract so much of the attention.”
Nathan Gurley led Cy Fair with 14 points and teammate Todd Silas added eight points in the loss.
The Seahawks return to the Carl Parker Center at 7 p.m. Wednesday to face Houston Community College.