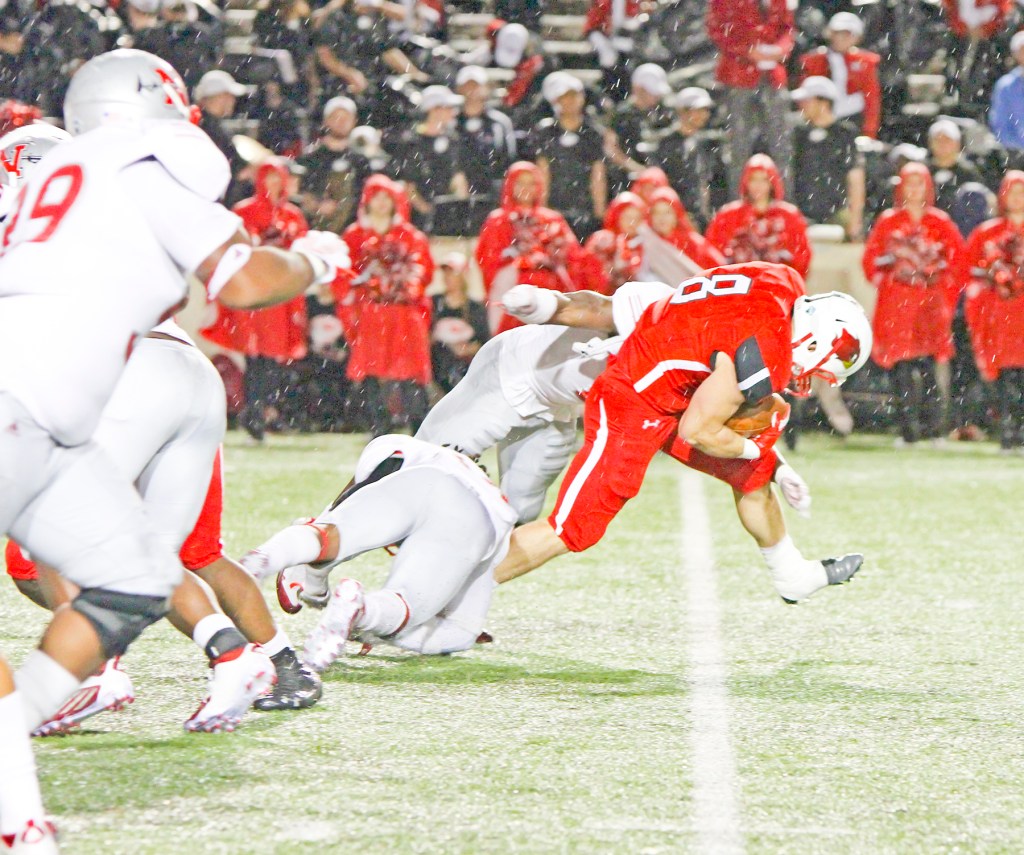 BEAUMONT — The stage was set.
Lamar moved the ball to the Nicholls State 6 and ran the clock down to 3 seconds on its final drive, giving Alex Ball a chance to play homecoming hero.
The 23-yard field-goal attempt from the left hash went into the wind, drizzle and all.
It sailed wide right.
And one-win Nicholls State became two-win Nicholls State, stunning the Cardinals 30-28 before a sparse crowd of 7,730 at Provost Umphrey Stadium.
“I trust him to make that field goal 10 times out of 10,” linebacker Shawn Jones said.
“I’m not saying I expect him to make it. That’s my kicker. I’m behind him. He missed it? Oh, well.”
It was Ball’s third miss of the season, after going into the game 10 for 11 on the year.
He also pushed it right from 46 yards out on his only other attempt of the evening to end the first half, leaving the Cardinals (4-5, 3-4 Southland) with a 21-14 lead.
Cards coach Ray Woodard said it didn’t matter what angle Ball had to kick from.
“That close (23 yards out), either you’re going to make it or you don’t,” Woodard said. “I was trying to score. I really wanted to run the ball if we could. At the same time, we wanted to do something safe.”
Woodard said he did not get to talk to Ball shortly after the miss to find out why he missed. Ball buried his head down the ground on both knees for minutes after the miss, while the Colonels stormed the field in the ecstasy of only their second win in two years.
The final result spoiled another record-setting game by Kade Harrington. The star junior running back for the Cardinals, who’s being promoted on social media as a candidate for national player-of-the-year honors with the hashtag #TheArKADE, set three records on the evening after rushing 32 times for 255 yards and two touchdowns, one of which went for 68 yards in the first quarter.
The total gave Harrington — the Football Championship Subdivision’s leading rusher — 1,805 rushing yards this season, earning him the Southland Conference record in that category. He also broke Lamar’s career all-purpose yardage mark and has 4,274, and matched Burton Murchison’s LU career 100-yard games mark with
13. Murchison, who played for the Cardinals from 1984-87, also had the all-purpose record of 4,203.
But Harrington said he cares nothing about records.
“I hate losing,” he said. “It’s not fun. We just have to bounce back and correct our mistakes.”
Harrington has rushed for 100 or more yards in each of his past seven games and has broken 200 yards for the fifth time this year.
None of that mattered, though, when Francisco Candado converted a field goal from
28 yards out at the 2:46 mark of the fourth quarter to give the Colonels (2-7, 2-5) their only lead of the game. With that score, Nicholls capitalized on a bad handoff from Carson Earp to Harrington that the Colonels recovered at their own 44 more than 4 minutes earlier.
“I would like to have a few plays back,” said Earp, playing in his second game since coming back from a shoulder injury that sidelined him 30 days.
Earp said Saturday night was the best he’s felt health-wise since coming back. He rushed for 76 yards on three carries, 72 of which came on an early second-quarter keeper to give the Cardinals a 21-7 lead. Earp also completed 3 of 5 passes for 13 yards, sharing time with starter Joe Minden (15 of 23, 130 yards, one interception).
It didn’t take long for any hopes of a usual homecoming blowout to turn into a nail-biter. Running back Tobias Lofton found a bust in Lamar’s defense and burst 82 yards with 8:13 left in the half to cut into the lead.
It was tied at 21 after Michael Henry closed the opening drive of the second half with a 9-yard run. Minden responded with a 12-yard keeper 64 seconds later to put the Cards back in front, following up a 44-yard sprint by Harrington.
Nicholls quarterback Landry Klann left his mark after taking over for Tuskani
Figaro, who was injured at the end of a 75-yard run down to the Lamar 2 to set up a tying score in the early going. He completed a 41-yard pass to C.J. Bates in double coverage to the Lamar 18, and later scored on a 5-yard carry. But the extra-point try hit the right-hand upright, keeping Lamar in front.
Klann had 144 yards on 10-of-20 passing for the Colonels after Figaro threw incomplete on his only attempt. Cardinals receiver Reggie Begelton pulled down nine catches for 82 yards.
Lamar must win at Incarnate Word next Saturday in San Antonio and defeat
McNeese State at home on Nov. 21 to secure its second straight winning record.