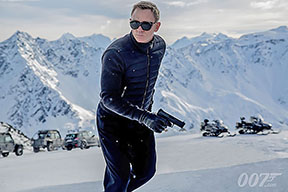 James Bond movies are known for their high-octane action sequences, and the latest 007 movie, “Spectre,” doesn’t disappoint. The pre-credit sequence that follows Bond (Daniel Craig) though a massive Dia de los Muertos celebration is an edge-of-your-seat thrill ride—one of the best opening sequences in Bond history. I found myself grinning from ear to ear in anticipation of what was to follow.

That grin faded, somewhat, because the movie never quite recaptures the magic of those opening moments. Sure, there are plenty of chases, fist fights and sexy women, but most of “Spectre” has the feel of an action franchise just going through the motions. Make no mistake, those motions are still pretty entertaining, but it’s not quite the blockbuster we were hoping for.

The story is a bit of a mess, although that’s frequently the case in a 007 movie. It begins with Bond doing some off-book work in Mexico City just as the British government is considering dismantling the 00 Program. Bond is tracking down a vast criminal conspiracy, which eventually leads him to Cristoph Waltz, who is the movie’s big villain.

I was a bit disappointed with Waltz’ performance, as most Bond villains are played with campy excess. Waltz’ low-key style pales in comparison, and while it may not be fair to compare him to other the movies bad guys, there is no denying that he never comes across as a truly dangerous madman. A hero needs a strong villain to measure himself against, and Waltz’ middling villain means that this Bond comes across as also somewhat diminished.

I do still like Craig in the central role, despite the fact that he’s vowed that this will be his last ride with the franchise. Nevertheless, he still exudes a raw physicality that makes him a refreshing change from previous incarnations of the hero that relied more on charm than any believable physical ability. I would certainly love to see Craig continue in this role.

And I would certainly love to see Sam Mendes return to the directing chair. He is a very good at shifting between the action sequences and the quieter or comic moments. The film could have used more urgency and it certainly could have used an edit to get it down from it’s two and a half hour plus running time, but I don’t blame Mendes for these faults. Even the greatest directors have trouble overcoming mediocre screenplays and actors.

All things considered, Bond fans will still enjoy “spectre.” All the essential elements are in place and there’s enough spectacle and fun Bond moments to keep fans clamoring for more 007 adventures.