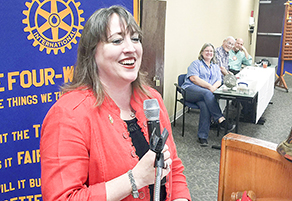 Doreen Badeaux, president of the Port Arthur International Seafarers Center, gave an update on the status of the local maritime industry at the noon meeting of the Port Arthur Rotary Club on Thursday at The Medical Center of Southeast Texas. She also played a video of the 9-11 boatlift. Roger Cowles/The News

When most people hear the term boatlift, they probably think of the historic Dunkirk evacuation during World War II.

The largest boatlift, however, was the one that occurred in the aftermath of 9/11.

“It was the largest sea evacuation in history,” said Doreen Badeaux, president of the Port Arthur International Seafarers’ Center — an ecumenical outreach ministry — and speaker at the Port Arthur Rotary Club on November 5. “At Dunkirk, 339,000 British and French soldiers were evacuated in nine days. After 9/11, more than 500,000 New Yorkers were evacuated. Merchant mariners did it.”

Badeaux said nobody knew what was going on and thought the world might be under attacked. Bridges, tunnels, railways, and airports were closed and the only way off the island of Manhattan was by water.

The Rotarians then watched a video on the 9/11 boatlift.

Speakers in the video reiterated how Manhattan is truly and island and the people felt they were trapped.

One tugboat captain said even if one he could save one person, that was one person left who would suffer and die.

Many residents were jumping in the river, trying to swim their way out. Some said they were jumping for their lives.

It didn’t take long for hundreds of boats to converge, according to the video.

Another result of the boatlift was everyone helping everyone else.

“There are 2,400 vessels per year that transit the area. There are 51,000 seafarers who come through the area and they’re spending their own money here. It’s healthy for seafarers to get off the ship. I think that’s something the Greater Port Arthur Chamber of Commerce would be excited about.”

Nationally, the ports of Beaumont, Port Arthur, and Orange have passed Newark, N.J. as the third largest port, she said. The Golden Triangle is also the number one port for moving crude oil, military supplies, and it will be the largest for Liquified Natural Gas exporter after Cheniere Energy is completed.

The maritime industry is responsible for 288,000 permanent jobs in the area.

Badeaux said young people who don’t know what they want to do in life should consider the maritime industry. She added there are a variety of jobs available that pay a good living wage.

“There are real job opportunities,” she said.