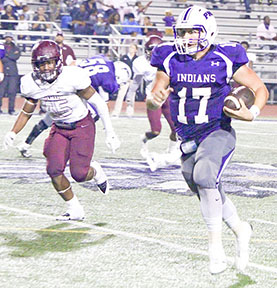 Quarterback Adam Morse and Port Neches-Groves can win at least a share of the District 22-5A title with a win tonight over Vidor. (Tommy Mann/Special to The News)

PORT NECHES — All the Port Neches-Groves Indians wanted was another chance at the title.

The Indians got their shot at the District 22-5A championship last Friday when they defeated Beaumont Central and the Goose Creek Memorial Patriots took down the Nederland Bulldogs.

If the Indians and Bulldogs both win tonight, the two teams share the league crown. If either loses and the other wins, the winning team takes home the championship outright.

First things first: the Indians are going to try and tackle the Pirates. Vidor leads the district in offense this year with 466.3 yards per game, including 441.5 rushing yards a contest.

It sounds like a daunting task for the Indians but one of the best kept secrets in the area is the fact they are the 22-5A leaders in total defense, allowing just 262.3 yards per game.

Yes, the unit slugged “The Landsharks” can get the job done for the Indians, and Faircloth is going to call on Dustin Templin to dial up another game plan to stop a potent offense.

The defense did its job last week against Beaumont Central, giving up only 187 total yards.

“Vidor still has a good team,” Faircloth said. “We have our work cut out for us. Vidor has a big offensive line and they are experts at that offense. People travel to Vidor to learn that offense. You don’t get two 1,000-yard running backs by accident.”

“Our defensive effort last week speaks for itself,” Faircloth said. “I couldn’t be more proud of Coach Templin and our defense. They have really been our rock force all year. Our defense has been solid and we have to continue that this week.”

Faircloth was so impressed with last week’s defensive performance, he gave it a pretty big praise.

“That was one of the top defensive performances since I have been here,” Faircloth said. “We have had some good ones but that definitely was top two or three, especially who it was against. It was a once-in-a-lifetime game.”