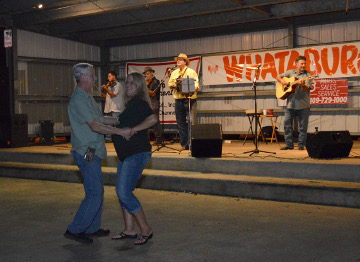 David and Lauri Saide dance to the music of Jude Moreau and the Bon Temps Playboys at the Lee Rogers Pavilion in Lion’s Park during Groves Pecan Festival on Friday. Mary Meaux/The News

GROVES — Festival fans danced the Cajun two-step, grabbed some fair food and hit the midway during day two of the Groves Pecan Festival.

Over at Ultimate Port-A-Bob’s Pam Foil sauced the succulent meat after Mickey Hern, Huny Nguyen and Kent Guidry did the grilling. The food truck is a popular spot every year and this year is no different. Guidry said their recipe is often imitated but never duplicated. 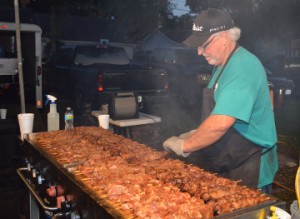 While the grill masters worked at dozens of pork-a-bob’s Katelyn McCoy was at the food truck window placing an order as her toy fox terrier, Noella, jumped up and down I excitement.

McCoy has just arrived and said she always stops for a pork-a-bob. 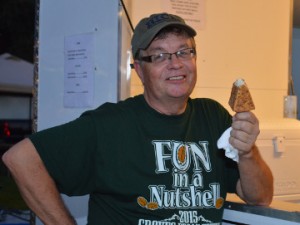 Don Sodman of the Groves Chamber of Commerce and Tourist Center, enjoys a fried cheesecake during the Groves Pecan Festival on Friday.
Mary Meaux/The News

“At this point it appears the festival is going to be very successful as far as the food and craft vendors go,” Corley said.

Karen Theis of Courtyard Café was looking to the upcoming cooler weather and is serving gumbo and little pecan pies at her booth. 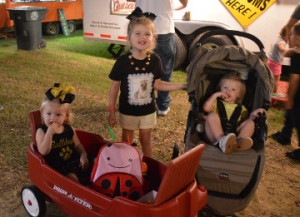 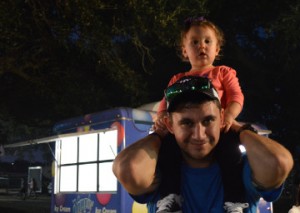 Thursday’s opening night had a hitch or two getting started. Ronnie Boneau, executive director of the Groves Chamber of Commerce and Tourist Center, said the event got a later then anticipated start due to some of the carnival rides being delayed in their trek from Louisiana to Groves. Lowery Carnival Company’s previous stop was at VooDoo Fest in New Orleans where they experience major rainfall and a muddy situation causing their delay.

Next came a second delay as organizers had to wait for the rides to be inspected by the fire chief and assistant, he said.

A rainy forecast has led officials with the festival to cancel Saturday’s annual Pecan Festival Parade.

“The festival will go on, rain or shine,” Boneau said.