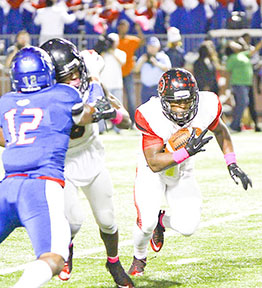 With last Friday’s double-overtime win over Beaumont West Brook, Marcus Younger and Memorial are still in hunt for a playoff berth. (Tommy Mann/Special to The News)

Titans get one more opportunity

The reason for the grin is his Titans pulled off an upset over Beaumont West Brook last week to give Memorial a legit chance at making the playoffs out of District 21-6A.

“It is a great feeling for our kids,” Harrison said. “Finally the hard work they have put into this season paid off. Now, we are going to try carry the momentum into our next ball game.”

Knocking off the Mustangs this week is a tall order. North Shore boasts at least four players with major Division I offers. Senior North Shore safety Eric Monroe is committed to LSU while linebacker/quarterback Maciah Long is committed to Kansas. Junior defensive end K’Lavon Chaisson has nine offers from schools including Baylor, LSU, Texas A&M and Arizona State, while junior defensive back Kieston Roach has offers from Alabama and Georgia.

The beauty for Memorial is the Titans have a pair of Division I recruits on their roster, if not more by the end of the recruiting season. Running back Kameron Martin is committed to Baylor while junior Kary Vincent Jr. has offers from SMU, Baylor and now Oklahoma State.

Martin and Vincent were two of the many Titans players who celebrated last week’s 16-9 double-overtime win over the Bruins by rushing the field. It was truly a state championship-style celebration.

“It was a great feeling to see our kids excited,” Harrison said. “They were even more excited for Cedric Lee.”

“Cedric is one of the best kids I have ever been around,” Harrison added. “Last couple of weeks, he has really stepped up.”

The big difference for the Titans over the last couple of weeks has been the play of the offensive line that started four underclassmen at the start of the season.

“They went through some growing pains,” Harrison added. “They are learning some things and starting to figure some things out. We had a tough non-district schedule and started district against two strong opponents. They are now playing with confidence and now Kameron Martin and Marcus Younger have more confidence in our offensive line.”

So if the Titans can knock off the Mustangs, Harrison and his team will then try to find out the outcome of Channelview and La Porte.

“I am a big Hurts fan this week,” Harrison said. “I am a fan of Coach [Averion] Hurts and his son [quarterback Jalen Hurts]. I am a fan of the Hurts family. Hopefully we can take care of our business, the Falcons can do us a favor on their end and we will be playing next weekend.”