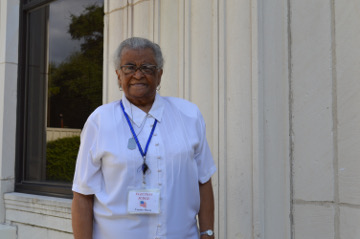 Election judge Vernice Moore, 87, takes a quick break from the pools at the Jefferson County subcourthouse on Tuesday. Moore has worked elections for more than 50 years. Mary Meaux/The News

For more than 50 years, the smiling face of Vernice Moore has greeted voters as they entered polling places to exercise their right to vote.

To say that Moore, 87, an election judge, enjoys her task is an understatement.

“I just love it,” Moore said during a quick break from the polling location at the Jefferson County Subcourthouse on Tuesday. “I’m an only child and my daddy started me in it, he helped me with my poll tax.”

Voting was a bit different five decades ago.

“I started out with paper ballots,” Moore said as she demonstrated how she opened each piece of paper to record the vote. “We had to count the paper ballots by hand, then there were machines with curtains.”

Through the years, she has worked at polling locations at Woodrow Wilson school, or Precinct 54-55, and Osborne Nursery on the Westside of Port Arthur.

“Ms. Moore has always been an outgoing and outspoken person,” Hatch said.

This is the first time for Valencia to work with Moore.

Blanchett, who has known Moore since 1998 and now acts as her driver, called her a sweet lady.

Besides being an election judge, Moore enjoys volunteering and is the oldest member of her church, St. Paul United Methodist Church.

Moore has no intention of stopping her work as election judge.

“As long as my vision holds up and my mind knows that two plus two is four, I’ll be there,” she said.