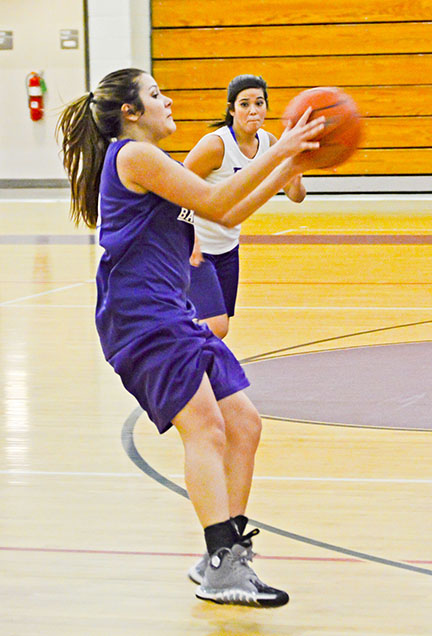 PORT NECHES — There is a new coach and new hopes surrounding the Port Neches-Groves Lady Indians basketball team this season.
Robin Wilson is no stranger to the program having served as an assistant coach but this is her first year leading the team.
If Wednesday’s practice is any indication, the Lady Indians fans can expect a team ready to play some tough defense built on getting to the basketball.
Wilson said she has started the process of putting in a new offense for PN-G. The Lady Indians are putting in a lot of work making sure passes make their mark and then worrying about getting to the basket.
“Defense is being preached,” Wilson said. “We have a new offense and we are trying to run a new defense. We are learning to get quicker. We have to learn some things and be on our toes.”
Wilson said the chemistry between her and the team is already set after she coached several of the players back when they were freshmen playing under her on the sub-varsity level.
“Learning the program and having them learn my program has been challenging,” Wilson said. “It is good and also challenging.”
One of the biggest tasks around the program is turning around a culture not used to winning.
Before making any grand announcement of a playoff run, Wilson said her Lady Indians have a goal set she fully believes her team can obtain in 2015.
“I am very disciplined,” Wilson said. “We work on skills and we keep going over that same skill until we get it mastered. One of the good things about me is I want that certain skill learned.
“Our passing is very important to me. To change bad habits you have to do it correctly over and over. We set goals. Our first goal is to be competitive. Our next goal is the girls have chosen to make the playoffs. I have a lot of confidence in this team. It is way to early to say we can obtain the playoffs. Can we be competitive? That goal we definitely can obtain.”