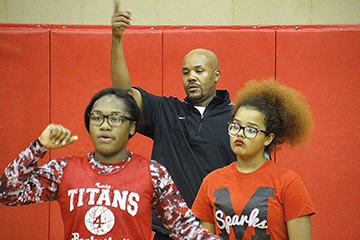 Teliah Joyce spoke for her Port Arthur Memorial teammates when they all were asked about the basketball season fast approaching.
“We’ve been waiting for it,” she said.
See, Memorial came close to a District 21-6A championship, two losses to North Shore keeping them away from the top prize. And the Lady Titans (23-8, 10-2 in 21-6A) followed that with a 6A bi-district victory over Dawson and second-round defeat to Clear Springs.
With six to seven players returning from last year’s varsity lineup and UTEP commit Jakeira Ford helping lead the way, they could have the pieces to make a deep run toward Austin and the state finals. At least that’s what Autumn Jones is looking forward to.
“I have faith in my teammates,” the senior guard said.
Fifth-year head coach Kevin Henry said Memorial has a shot.
“These girls have been playing together for a long time, since elementary school,” Henry said. “I think they’re focused. They’re a lot more focused this year. And they saw that we were right there on the bubble. We were right on the bubble the last couple of years. I think they’ve willed it in their minds that they’ll overcome that obstacle. If we can get past that second round, that’ll be a big monkey off our backs.”
The 6-2 Ford verbally committed to UTEP in August, months after averaging 17.8 points and 10.7 rebounds as a junior. Others that offered Ford scholarships include Lamar, LSU and Southern California.
“She’s probably the most acclimated player on the team,” Henry said. “She was the second-leading scorer on the team last year, the leading rebounder, and with her size, she can put the ball on the floor and she makes it hard for people to be able to guard her.”
Henry didn’t immediately have statistics for any other returning players, but he says he has a balanced lineup offensively. Channel Babineaux, Victoria Brown, Joyce — whom Henry said was the leading scorer — and Jones are among a senior-laden group of Lady Titan guards, and they believe their lack of height — although they have Ford and 6-2 post Kennedi Lofton — will often be their biggest challenge.
“Everyone’s got to get in there and be aggressive,” Joyce said.
But Henry is getting used to the lack of size in his program, something he didn’t have to worry about in past seasons.
“They play with big hearts,” Henry said. “That’s one thing you can’t judge, is a person’s heart. And they play bigger than what they are.
If not Ford, anyone can dominate that scorebook for Memorial in any game, Henry said.
“We’d like to bounce the ball inside, but when you have girls who can shoot like they are and confident with the ball, … it’s balanced,” he said.
Memorial has scrimmages at Beaumont Central on Thursday and at Beaumont Ozen on Saturday before starting the regular season Monday at Lumberton. Memorial’s first home game is Nov. 17 against Brazosport.