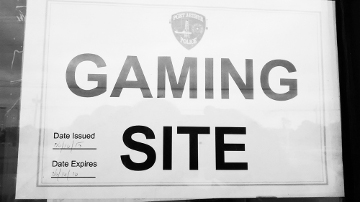 Port Arthur city ordinance requires all gaming sites to be registered with the city as well as each machine. Mary Meaux/The News

“We’re doing checks throughout the city to make sure they (establishments) are in compliance and if we run across one that isn’t, we’ll issue citations,” Boneau said. “As of this time we believe all the locations we’re familiar with are permitted.”

Ordinance No. 15-13 was approved in April as a way to regulate the gaming sites and gaming machines in order to prevent illegal operation of the machines in the interest of protecting the health, safety and welfare of the citizens of Port Arthur, according to the document.

A gaming machine is legal, according to the Texas Penal Code, is it is used for “bona fide amusement purposes” that rewards the player exclusively with non-cash merchandise such as toys, novelties or items worth no more than 10 times the amount charged to play the game or device once or $5, whichever is less.

This means the gaming site cannot legally pay out cash.

Running a gaming site isn’t cheap. The owner must come up with a $100 application fee and $600 fee per machine per city ordinance, Boneau said.

If an establishment is registered and pays out cash illegally, they can be charged with promotion of gambling, which is a class A misdemeanor and up to one year in jail and a fine of $4,000 or both.

“We have been issuing citations and doing spot checks and enforcement checks,” he said.

Since the ordinance has been in place, officers have issued 60 citations for violations of the ordinance permit or registration of each machine.

“For the most part, the majority of businesses are compliant with the city ordinance,” he added.

PAPD Officer Mike Hebert presented information to Port Arthur City Council recently updating them on the issue. He explained each 8-liner machine’s serial number and model number are recorded by police and if there is a violation police will pull the motherboard of the machine, which will shut down the game.

At the time of Hebert’s presentation, $414,600 in revenue from registration fees had been generated for the city and those monies go toward enforcement. Money derived from penalties go into the city’s general fund.

There are still concerns regarding the gaming.

“There is still a misunderstanding within the public in that because they have to register the machines doesn’t make gambling legal in the city,” Boneau said. “It is still against the law (gambling). We’ll be running operations and have numerous enforcement plans to deal with these businesses still paying money for winning.

Another concern is the criminal element associated with gaming sites. There have been several robberies at these businesses but many times the victim doesn’t want to contact police because of the type of establishment in which the crime occurs.