Gaming sites have many different faces 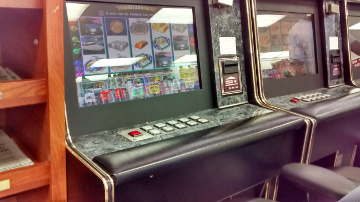 The city of Port Arthur has an ordinance regulating gaming sites and the machines, also called 8-liners. (Mary Meaux/The News)

Owners and players at registered gaming sites across the city are generally pretty tight-lipped about their business.

Some of the 50 sites in Port Arthur are inside convenience stores where rows of coin-operated 8-liners line a section of the building; others are not as easy to see even with the required signage designating the business as a gaming site.

One of the city’s newest sites is in a bright green building that once was home to a Mexican restaurant at 2446 Memorial Blvd. Remnants of the former restaurant could be seen where some walls feature murals and the layout currently remains the same as before — with the exception of about 30 8-liner machines.

The owner of the gaming site, who did not wish to give his name, said the business is called Smoke Elements and will soon add an e-cigarette shop to the business.

The city of Port Arthur recently passed an ordinance regulating 8-liners. The gaming machines are legal as long as the establishment does not pay out cash but is for “bona fide amusement purposes.”

Legal rewards include toys and novelties.

Those seeking lady luck in the form of a legal cash payout need only to make an hour’s drive across the border to Louisiana.

“Instead of a cash payout, we give extra time to play, give out grocery items and teddy bears,” the owner said.

He admits he doesn’t get a lot of customers but said his is a safe environment.

As he spoke several people entered the door as an audible message came across speakers announcing “door.” Near the front of the doors is a set of video screens monitoring security in and around the business.

“Many of the unsafe game rooms are now closed down because of the ordinance,” he said. “The city’s ordinance made it safer (to operate the game room). It has helped for security. The ordinance says you can’t keep the doors locked and you have to have windows.”

Some convenience stores, he said, had gaming rooms in the back with no windows.

“That is a security and safety issue and those businesses would foster crime,” he said. “The ordinance is helping legitimate businesses.”

Wireless Gift Shop, 3505 Twin City Hwy. in Jefferson City Shopping Center, features a cell phone business in front and gaming in a back area. The man who identified himself as owner declined to give his name. He said he’d only been in business about a month.

Some gaming sites require the player to ring a doorbell, then wait for an attendance to open the door.

One such place, registered as Gift Shop, 7765 9th Ave., is nestled between Super Spin Washateria and John’s Seafood. Security cameras were visible in several areas and inside was a small lobby where there was a closed door in the back of the room. No one answered the doorbell at this establishment, but a few minutes later a female escorted another woman out the front door, then locked the door back.

Sometimes the owner or attendant answered the door at gaming sites but refused to speak, only shaking their head. Such was the case at Click Connection, 2503 Jefferson Drive; and Marino’s Gift Shop, 3741 25th St.

Across the border in Louisiana, those wishing a crack at legal gambling can visit L’Auberge Casino Resort, Isle of Capri Casino, Golden Nugget and more in Lake Charles.

Texas — where gambling is illegal with the exception of charitable bingo, Texas Lottery, pari-mutuel wagering on horse and greyhound racing, pull-tabs and raffles — is bordered by Louisiana, Oklahoma and New Mexico, where gambling is legal.