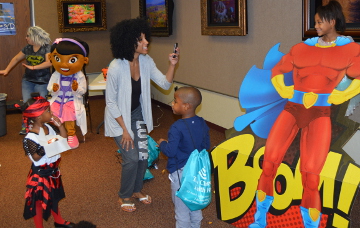 Cutline: Jazmine Eaglin, 24, of Port Arthur takes a photo of her cousin, Carlie Sigur, 7, of Port Arthur, who is posing behind the superhero cutout, while others get into the groove of Saturday’s Halloween Heroes festivities.

The event not only offered indoor activities for children, but also provided a time to learn the importance of getting a flu shot.

Andres Garcia, community relations specialist with the Texas Children’s Health Plan, said Port Arthur zip codes 77640 and 77642 had the highest number of visits to the emergency room for people exhibiting symptoms of colds and flu.

“We are really pushing for kids to get the flu shot,” Garcia said.

Texas Children’s Health Plan is partnering with Port Arthur schools to have a contest. The school with the most students getting flu shots will get a party, Garcia said.

At Saturday’s event, though flu shots were discussed, there were plenty of fun activities for the children to enjoy.

From story times and a Lego Center to a costume contest and a dance contest, and even the unveiling of a mural, there was something for everyone.

Jazmine Eaglin, 24, of Port Arthur, brought her two small children, a cousin and a friend’s child to the Port Arthur library Saturday.

“We’ve taken pictures, collected souvenirs, and danced. Everyone is having a good time,” Eaglin said

The book, Simien said, was a tribute to her mother, and was written to highlight the Creole culture.

“Bonjour, Tee Belle,” was peppered with French words on each page.

Tee, Simien said, is short for petite and belle means beautiful in her mother’s French language.

Around noon, a Unity in the Community-themed mural created by children attending the Labor Day weekend workshop was unveiled. ,”

“Everybody worked together to create one final product,” Thibodeaux said.

In February, Ellis will be back at the library to sign the mural. In the meantime, it is available for viewing in the library gallery.