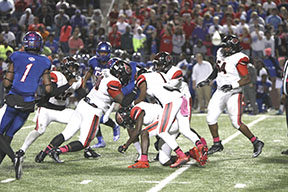 Memorial’s defense wraps up an unidentified West Brook ball carrier during Friday’s 16-9 double-overtime win for Memorial at the Thomas Center. (Tommy Mann Jr./Special to The News)

BEAUMONT — Cedric Lee had his sights on the game’s biggest play.
“I was thinking about that same play every single down,” the Port Arthur Memorial junior linebacker said, “catching the pick to win the game. I thank God for everything. He’s the only reason I did that.”
Lee stepped in front of a Beaumont West Brook inside receiver and picked off Justin Essex on the Bruins’ second play of double overtime, and Memorial kept its playoff hopes alive Friday night with a 16-9 win inside the Thomas Center.
Memorial (3-6, 2-3 in District 21-6A) can force a three-way tie for third place and clinch the fourth and final playoff seed by upsetting North Shore (6-3, 5-0) and having Channelview (7-2, 3-2), which has earned the No. 3 seed, lose to La Porte (7-2, 4-1). West Brook (6-4, 3-3) has completed its district schedule, having defeated Channelview, which beat Memorial this season.
For Kameron Martin and his fellow seniors, their final regular-season game at Memorial Stadium has added meaning.
“It’s just a blessing,” he said. “All week, I’ve been practicing on going full-speed every play. It’s just God. Nothing but God. I told my team, never give up.”
Martin helped lift the Titans into overtime with a 45-yard catch and run down the left-hand flat to the Bruins’ 9 on third-and-20 in the final minute of regulation, with
West Brook still leading 9-6. Keitha Jones, who completed the pass under pressure, threw three straight incompletions before a pass interference penalty against West
Brook moved the ball to the 2, rather than half the distance. Raul Estupinan kicked the 19-yard field goal as time expired.
“Kameron Martin did a good job leaking out to the flats, and Keitha Jones did a good job finding him in the flats,” Titans coach Kenny Harrison said.
West Brook could have taken the lead on the opening possession of overtime, but
Missial Tovar missed a 26-yard field goal. Memorial was staring at a 39-yard try for the win against the wind, but a delay-of-game flag forced the Titans to go for it on fourth-and-8 from the 23, and Jones’ toss into the end zone was incomplete.
Starter De’Andre Angelle connected with Marcus Younger for 17 yards two plays into the second extra frame. Martin, who was held to 52 yards on 16 rushes, carried for 7 yards total on the next three plays, punching the ball into the end zone from 3 yards out to give the Titans the lead.
Harrison said Jones is more of a passer than Angelle, the converted wide receiver who’s the stronger runner of the two quarterbacks, hence the coach’s choice for the clutch drive in regulation.
“We felt we were going to have to pass because they [Bruins] were playing man and we hadn’t thrown it all game. We put a better passer in, and that was Keitha Jones, and he made a good play, him and Kameron Martin,” Harrison said.
The two quarterbacks combined to go 2 for 6 for 62 yards.
Joel Denly, coming back from a shoulder stinger in a 23-20 loss to La Porte a week earlier, rushed for 2 yards before Lee’s interception. Denly had 19 carries for 64

yards, including a 33-yard TD run early in the third quarter.
The Bruins were getting closer to sealing the fourth and final playoff spot from 21-
6A after Desmond Veals blocked a punt that rolled out of Memorial’s end zone with
3:08 left for a safety, upping their lead to 9-6. But the Titans forced them to punt on fourth-and-1 deep in their own territory and took possession with 1:52 remaining.
Kevin Williams picked off West Brook’s first pass of the game, ending a 10-play, 54-yard opening drive that running back Nick Taylor was entirely responsible for. The
Titans capitalized three plays later on Angelle’s 44-yard quarterback draw, and the
Titans held on for a 6-0 lead at halftime with a missed extra point by Estupinan.
Williams can take as much credit for Memorial’s success. He had two interceptions, stopping a Bruins drive in Titans territory and returning the ball 30 yards to midfield. But West Brook returned the favor on the following series when
TehKyrian Antoine picked off a fourth-down pass in the end zone near the end of the half.
The Bruins also fumbled away on their second drive of the game. They had four first-half drives, the last one ending as time expired.
Angelle finished with 76 yards on 16 carries. Taylor had 86 yards on 19 carries but did not rush in the second half.

PORT NECHES — Typically when Mitch Murdock calls out a score over the public address system, Brandon Faircloth and his... read more